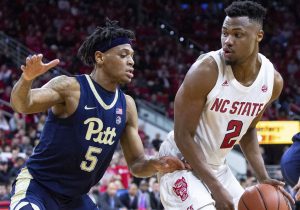 After a week away from the comfy confines of the Peterson Event Center, the Pittsburgh Men’s Basketball returned to action at home against the North Carolina State Wolfpack with both teams looking to end losing skids in ACC play. The Panthers entered the game on the back of a six-game losing streak following an excruciating overtime loss at the hands of Wake Forrest, 78 to 76 on Tuesday night in Winston-Salem. Likewise, the Wolfpack were coming of a trying stretch of games against some of the top teams in the ACC, losing to North Carolina, Virginia Tech, and Virginia in their last three times out.

The Saturday afternoon tip allowed a boisterous Oakland Zoo to turn up in great numbers for the annual Blackout game at the Pete. Armed with black shirts to match the Pitt team on the court the crowd looked to will the Panthers out of their recent woes.

Early on the fans had little to cheer as the Panthers gave away five turnovers in four minutes to fall behind 12 to 9 at the first media timeout with 16:12 remaining in the half. However, the Panthers refused to go away as their physicality enabled the Panthers to get into the lane with regularity. The freshman sensation, Trey McGowens lead way for the team contributing ten points, including three for three shooting from the line, much to the delight of those in attendance.

While, the Panthers were able to keep it close thanks to play of McGowens, turnovers continued to ail the Panthers as they gave the ball away a shocking eleven times in the first half, which allowed the Wolfpack to maintain a three-point lead, 41 to 38, at the interval.

The second half got off to a sluggish start for the Panthers, as North Carolina State wasted no time growing the lead from three to 12 points in the first five minutes of the half.

Nevertheless, the Panthers continued to fight back going on a 18 to 2 run to get themselves into the lead, 61 to 59, with 10:30 left in the games, which sent the 8,950 in attendance into a frenzy. Down the stretch the game was dominated by the offensive power of both teams, with Jared Wilson-Frame leading the way for the Panthers. Wilson-Frame contribution of 16 points on 6 of 7 shooting ended up not being enough as the Wolfpack pulled out the win in a close one, 79 to 76, as the Panthers were unable to get multiple game tying shots to go in the final seconds.

The loss moves the Pitt Panthers to 12 and 12 (2 and 9 in the ACC) with seven games remaining on their regular season schedule. The Panthers return to the court on Tuesday at Boston College, as Panthers will look to earn their first ACC road-win of the year.