Hockey Returns: Previewing the NHL’s Round Robin Tournament and Qualifying Round 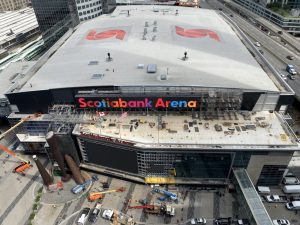 It has been a minute.  Last time we checked in on the NHL season, things were moving swimmingly and moving towards a playoff push.  Minnesota was in the midst of a 7-3-0 stretch, with young stud Kevin Fiala putting up 15 points in those 10 games.  Flyers fans rejoiced as their beloved Broad Street Bullies were 9-1-0 in their last 10 games, with a sizzling power play that boasted a 28.57% effectiveness in that span.  And then the world stopped.

As Rudy Gobert tested positive for Covid-19 in the NBA, the NHL took the precaution of putting the season on pause as the NHL and NBA share arenas.  The last NHL game took place between the Ottawa Senators and Los Angeles Kings, with the Kings clawing out a win 3-2.  NHL players tested positive for Covid-19 just as regular people have all around the world.  We are all human.

With sports gone, we lost a sense of normalcy.  No NBA, no LeBron, no Kawhi, no Vince Carter retirement party.  No NHL, no Sid, no McDavid, no 50 goal seasons.  No MLB.  We latched on to the small things, Korean baseball, The Last Dance, our families.  But now, as the world is changing around us and with sports on the horizon, we can get back to a new normal in our lives.

Looking into the specifics of hockey, we now venture into a 24-team tournament that will have a round robin set in each conference along with a qualifying round.  As usual, the playoffs will be divided into the East and West conferences.  As for location of the matches, the NHL had originally announced 10 hub cities under consideration with only 2 being selected.  The cities included Chicago, Columbus, Dallas, Edmonton, Las Vegas, Minneapolis/St. Paul, Pittsburgh, Toronto, and Vancouver.  The NHL has now selected Toronto (likely East hub) and Edmonton (likely West hub) as the hub cities.  The Canadian cities have seen low numbers in terms of Covid-19 cases and are well equipped to host the NHL.

In each conference the top 4 teams will duke it out in a round robin set.  In the Eastern Conference we have the Boston Bruins, Tampa Bay Lightning, Washington Capitals, and Philadelphia Flyers.  The Bruins will play 3 games in total, 1 game against each team.  This holds true for the 3 remaining teams in the East.  Looking at the Western Conference the St. Louis Blues, Colorado Avalanche, Vegas Golden Knights, and Dallas Stars will have at it in the round robin.  St. Louis and Co. will all total 3 games, 1 against each other.

After every series is complete, the 2020 Stanley Cup Playoffs will begin.  The teams will be re-seeded from highest to lowest.  In the playoffs, we will see re-seeding every round.  In the Stanley Cup Final, the team with the higher regular season point percentage will have “home” ice. 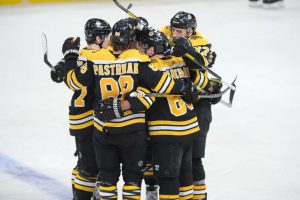 The big bad Bruins come marching into the round robin tournament with the weakest on paper numbers, only 3 combined wins against their opponents.  Don’t let this fool you, as the Bruins have officially won the Presidents’ Trophy as the best team in the league, just cracking 100 points (.714-point percentage).  The perfection-line of David Pastrňák, Patrice Bergeron, and Brad Marchand proved to be the most daunting line in hockey.  Pastrňák tied Alex Ovechkin in the league lead for goals scored with 48.  Marchand was second in points on the team while Bergeron sat behind the rat.  Tuukka Rask is a front runner for the Vezina Trophy as he posted a .929 save percentage.  With veterans like Zdeno Chára and David Krejčí still on the roster, the mental game won’t be an issue.  The Bruins are poised for a big cup run after last year’s disappointing game 7 loss to the St. Louis Blues in the Stanley Cup Final. 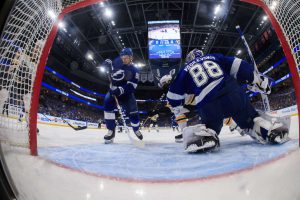 Getting over the hump has not been easy for the Bolts this season.  After a slow start to the season, the Lightning kicked things into sixth gear going 23-2-1 starting on December 23rd, 2019 until February 17th, 2020.  After this outstanding period of hockey, the Lightning went 3-6-1 in their last 10 games before the season hit pause.  The Bolts hit it big at the deadline acquiring Blake Coleman and Barclay Goodrow.  Nikita Kucherov ramped up his offense scoring 85 points over the season.  Andrei Vasilevskiy’s .917 save percent is good, but he will need to be great to push the Bolts deep in the playoffs.  As a team, the Lightning must break through the mental barrier that they put up early in the season.  The Columbus series still haunts these players, do not be mistaken.  It will be up to captain Steven Stamkos and stud defenseman Victor Hedman to provide leadership, as the team looks to break through and return to the Stanley Cup Final, a place they haven’t been since 2015. 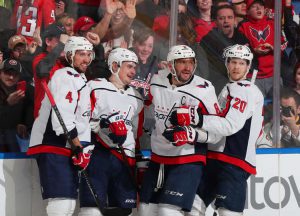 When was the last time that Alex Ovechkin did not lead the Caps in scoring?  The 2016-2017 season where Nicklas Bäckström led the Capitals in scoring.  Now, this season John Carlson led the team with 75 points.  Carlson is the clear frontrunner for the Norris Trophy.  However, there is a more pressing question for the Caps: when was the last time Braden Holtby posted a save percentage below .900?  The answer?  Never.  The second worst season of the Canadian’s tenure came in 2017-2018, where he posted a rough .907 save percentage.  Head Coach Todd Reirden announced backup Ilya Samsonov will receive 1 of the 3 starts in the round robin tournament.  The starting job is Holtby’s to lose.  Overall, this team has all the components to make a deep run in the playoffs, as this roster has developed a dynamic chemistry over the years.  Alex Ovechkin is foaming at the mouth for another shot at the Cup.  A mediocre 5 wins in their last 13 games of the season has the team set on success in this round robin.  Secondary scoring is a must for the Caps. 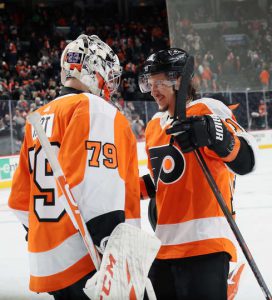 An absolutely banging end to the Flyers’ regular season saw them win 9 of their last 10 games.  Post All-Star break, the Flyers posted a record of 14-3-1, as the Broad Street Bullies were catching fire at the right time.  Philadelphia’s play this season has been led by young gun Travis Konecny, who posted 61 points for the Flyers.  This postseason run has the Flyers back in the playoffs for the first time since the 2017-2018 season.  Carter Hart will likely be the key to success for the Flyers.  Hart posted an abysmal .857 save percentage on the road this season while he boasted an otherworldly .943 at the Wells Fargo Center.  If Philly can get past the Lightning the Flyers will likely get a top 2 seed in the playoffs.  This round robin will be a true test for the Flyers defense as the crew will see tough matchups from every first line.  Claude Giroux, Sean Couturier, and Jakub Voráček have the task of leading the team to a successful postseason. 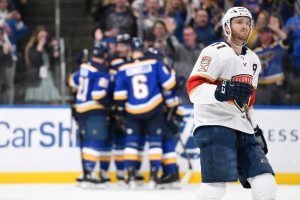 Defending a Stanley Cup is never an easy task.  The Blues have done an excellent job at it, claiming the Central Division as their own.  Two 8-game win streaks over the course of the regular season has helped the Blues maintain a champion’s mentality.  Jordan Binnington, in his first true season as a starting NHL goalie put up commendable numbers with a .912 save percentage and a 2.56 goals against average, similar numbers to his performance in last year’s cup run.  Vladimir Tarasenko will likely return to the ice, after injuring his shoulder.  The fresh Tarasenko only played 10 games during the regular season and will be a key contributor as the Blues will look to repeat as Stanley Cup Champions.  The top 4 d core of Alex Pietrangelo, Colton Parayko, Marco Scandella, and Justin Faulk is steady as always.  The Blues defense is one of the best constructed in the league.  Ryan O’Reilly and David Perron lead the team in scoring with 61 and 60 points, respectively.   If the Blues can stay the course there is a real shot that they will repeat as the Stanley Cup Champions. 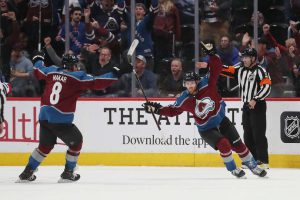 Which team has the biggest gap between their leading scorer and their second closest scorer?  Buffalo?  Jack Eichel has 28 more points than the next closest scorer on the Sabres, Sam Reinhart.  Close but no cigar.  Nathan MacKinnon, who missed time this season due to injury, had 93 points in the regular season.  The closest to him?  Rookie defenseman Cale Makar, who had 50 points in a sensational Calder campaign.  The 43-point gap is easily the biggest in the league.  The Avalanche seem like a well-balanced team, but MacKinnon’s performance is Hart worthy.  The man put the team on his back.  With the second-best forward line in the league centered by MacKinnon featuring Gabriel Landeskog and Mikko Rantanen returning, the Avs will have plenty of help up front.  Depth from Nazem Kadri and André Burakovsky has propped up the first line as the second line had been scoring at a great clip.  If Philipp Grubauer could return from injury, the Avs goalie situation would be great.  Pavel Francouz has been immaculate in Grubauer’s absence, as Francouz has posted a .923 save percent.  Cale Makar will be a difference maker for the Avalanche as a dynamic, puck-moving defenseman who can score at will.  Watch for the Avs to go deep. 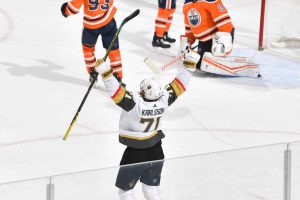 Injuries abound, a coaching change, and one of the best saves of the year.  That’s the Golden Knights for you.  A hectic season placed the Knights first in the Pacific Division, a position the Knights return to after a year in 3rd place.  The Golden Knights hit a 5-game losing streak in mid-November, the longest such streak in franchise history.  After a 4-game losing streak in January, head coach Gerrard Gallant was fired and replaced by Peter DeBoer.  Under DeBoer, the Golden Knights went 15-5-2.  Getting Mark Stone and Alex Tuch back will be key for the Knights as Stone was second in scoring on the team, with 63 points in 65 games.  Acquiring Robin Lehner at the deadline has made the goaltending tandem in Vegas one of the best in the league, with Marc-André Fleury still in the starting position.  Lehner posted a .940 save percent in his 3 games while only allowing 5 goals total in Vegas.  Ryan Reaves will be a pain to deal with in the postseason, as always.  Shea Theodore and Alec Martinez will lead the charge on the defense.  May the odds be ever in your favor, Vegas. 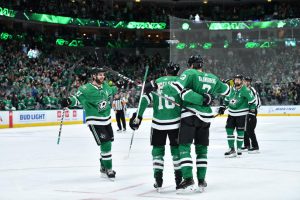 One of the best defensive teams in the league, the Stars only gave up 177 goals on the season.  The duo behind this success?  Ben Bishop (.920 save percent) and Anton Khudobin (.930 save percent) dominated the regular season as an elite goaltending combination.  Miro Heiskanen followed up a phenomenal freshman year performance by busting on to the scene once again with 35 points, avoiding the sophomore slump.  Heiskanen is a star in the making.  From one Scandinavian defenseman to another, John Klingberg had a down year, but that may be due to an injury sustained in early January.  Klingberg will play a vital role on the Stars’ power play, a big part of the Stars’ offense.  Big hitters Tyler Seguin and Jamie Benn will need to step up in a similar fashion to last season’s postseason run.  Seguin notched 11 points while Benn scored 10 for the Stars against the Preds and Blues last spring.  Young gun Roope Hintz will need to light up the 2nd pair of the opposition, as he centers a solid second line.  Hintz scored 33 points in 60 games this past season, compared to 22 in 58 the season prior.  The Stars have work to do but could stifle opponents with a lethal defense and average offense.