Last Monday, just ahead of the iconographic, late-March snow in Pittsburgh, Nils Frahm took the stage in front of a hushed congregation, fluttering with excitement for what would be nothing short of a religious experience. For the months leading up to this show, I wondered what Frahm would do in terms of a stage setup. What would the classically trained German musician do when charged with picking amongst his beloved assortment of buttons and pianos to lug across the ocean? I imagined a distressed Frahm would resort to flipping a trusty euro coin in this crisis. Turns out, he just brought them all: Frahm’s vast (see: absurdly cool) array of gear was moved in what appeared to be a 22 ft. truck (that’s around 6.71 meters for the domestic Frahm-heads reading this) along with his tour bus. Smart move, Nils. The stage was decked with possibly more sets of keys than the man had fingers, sure to make any synth-head drool with envy. A monstrous mixer took center stage, allowing Frahm to adjust volume and EQ of his drum machines, Rhodes, and toy piano on-the-fly throughout the performance.

In lieu of an opener, the velvet-drenched church rung with the ambient sounds of “The Caretaker,” wrapping the crowd in a headspace of still melancholia. As these Kubrickian vinyl loops crackled over the house speakers, eager fans of ambient piano music (more than you’d think) poured through the doors, quickly filling the seated area in front of the stage. When Frahm emerged, the crowd was nearly double the size of the number of chairs, the rest of us packed against the sound booth or hovering from above in the balcony section. As he took position on a stool in the leftmost of his dense gear pockets, the gorgeous sounds of a harmonium filled the air, a twinkling toy piano providing a light seasoning overtop the eloquent, reed-like sustains. Everyone in the crowd had their seatbelts clicked and secured at this point, actively being checked by a friendly Mr. Smalls employee who looked like they could only speak in 4/4 kickdrum. At the conclusion of this dramatic introduction of sustain and drone, Frahm hopped up and tiptoed to the center of the stage over to what I call “Mission Control.” 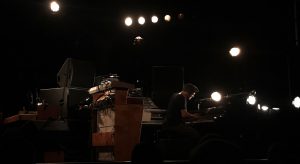 Above the persistent harmonium, Frahm moved to the Rhodes for that reverberating, bell-like fluid sound we all needed above the lofty, droning reeds of the harmonium. Moments like these were so trance-like that this writer can’t even describe to you how he managed to warp this kaleidoscopic slow jam into a four-to-the-floor stomper. One of the most impressive parts of the set was how well Frahm maneuvered from one piece of equipment to the next, while still maintaining a fiercely emotional performance style. The times that he paused to speak to the audience, Frahm was not only adorably personable, but also surprisingly hilarious. He joked about his “Monday night service” at the church, how hard it was to turn knobs, and how his most popular song was really written by one of his many synthesizers. The man even invited those in the back to sit crisscross-applesauce in the aisle and up front to finally utilize those skills we have been honing since elementary school! Frahm followed his first comedic powwow by moving over to a flat piano that was without a doubt used to record his recent Encores EPs. The piano flawlessly delivers every sound out of the keys, from the touch of fingertips to a delicate impact with its own glorious wooden body. This jaw-dropping intimacy made for some of the most revealing, intense performances I have had the pleasure to hear via solo piano. Frahm played many of his more minimal pieces on this piano, despite the presence of a full-size grand piano on stage right, which made the inclusion of both feel a bit excessive; but hey, if you’re gonna try to build a maze of equipment for one man to perilously navigate for an entire set, you might as well go for style points, RIGHT?

The climax of the set occurred during the encore, as Frahm migrated across the stage from the harmonium to the grand piano (this time a bit more of a brooding lurch from the Frahmster — chilling). Killing the dwindling keyboard sounds hovering around the atmosphere of Mr. Smalls, the crowd watched in awe as two felt mallets lifted above the metallic springs of the grand piano. The melody that arose as Frahm hammered away at the springs of the piano sounded unimaginably tribal. At this moment, the artist seemed more an illustrator than a performer, with imagery of untamed natural expanse inadvertently sneaking into my mind. The tribal, percussive movement finished as Frahm breathlessly burrowed into an equally momentous and intricate display of the melody on the keys of the grand piano. At the end of the set, Frahm, champagne in hand, joyously waved goodbye to Pittsburgh, feeling more like a friend bidding us adieu than a stranger in our city. He spent some time afterwards to sign some autographs and spend some genuine time with some admirers blown away by his near two hour set. We even got a chance to give the man the regards of WPTS and salute him with what we could – a handsome WPTS magnet. 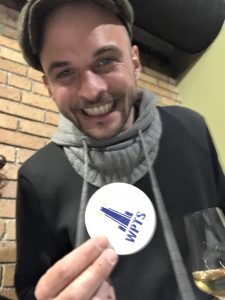