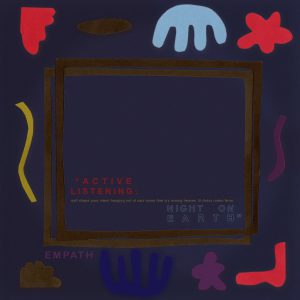 Empath is a Philly based noise punk band on Get Better Records, a label known for their focus on LGBTQ bands. Empath’s music uniquely combines elements of nature and noise rock: they are making music for challenging music and aren’t entirely concerned with what may interest the general majority. It’s sometimes pretty and sometimes wild, but is overall fun. The only time I have had the privilege to see them live was in Pittsburgh when they opened for Swearin’, an experience that let understand just how “outsider” Empath was willing to push their art. In place of the typical shirt or dad hat, their merch table was googly-eyes and torn apart baby dolls. Not inviting by any means,, but it showed who they were and what their purpose was: making music for themselves, for expression and for fun, not fame.

Active Listening: Night on Earth is more than a mouthful so to speak. The title sounds more like science fiction film than an album title, though it sums up the album perfectly. The album floats somewhere between a walk on earth and a tour of the martian embassy. Constantly changing and adapting, Active Listening is filled with spacey synths, looping guitars and occasional animal noises. The albums opener “Soft Shape” is fun and intensely layered, but manages to maintain catchiness throughout the weirdness. As the track ends it builds to what is in essence chaotic punk. Other parts of the album are very ambient, namely the final bit in “Pure Intent” and the instrumental track “IV”. Tracks like “Rowing” manage to cross these types of songs, with a scattered brand of punk music paired with synth treatments. Overall this album is pretty equally all over the place and difficult to describe, but so worth checking out, especially to experience something new and unique.