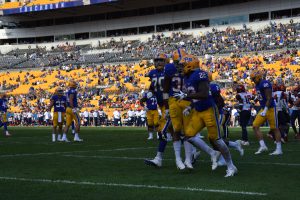 Pitt traveled to South Bend, Indiana to play their final out-of-conference scheduled opponent on Saturday. Notre Dame was ranked fifth by the Associated Press before this game with a 6-0 record. Their 19-14 win over the Panthers improved their record to 7-0, while the Panthers fall to 3-4 on the season.

The first half of the game was a battle between the defenses, as only 13 points were scored between the two teams. The Panthers’ first touchdown of the game came from a long 9 minute and 43 second drive. The drive was extended by an offside penalty committed by the Irish on 4th down, which set up a 9-yard touchdown run by Qadree Ollison. The next drive, Jason Pinnock intercepted Ian Book to give the Panthers another chance to score points. Before this game, Book had only thrown one interception on the season. Pitt was not able to score any more points on offense during the first half, while Notre Dame scored 6 points off two field goal attempts. The game went into halftime with Pitt leading 7-6.

The Panthers received the kick off to start the second half, which Maurice Ffrench returned all the way for a Pitt touchdown. The 99-yard score was his second kick return touchdown of the year. The Panthers went up 14-6 after the touchdown, and that would be all the points scored by Pitt on the day. On the next drive, Book threw his second interception of the day to Jazzee Stocker. Pitt was able to drive down the field into field goal territory twice, but Alex Kessman was unable to make either of the field goal attempts. The Notre Dame offense scored two touchdowns against Pitt’s defense to lead 19-14, which would be the final score of the game.

The Panthers now enter their bye week and will be off until an October 27th home game against Duke.