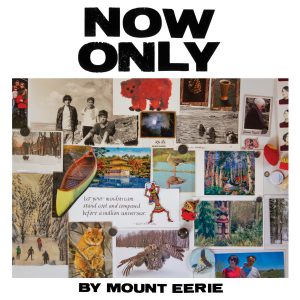 Last year’s Mount Eerie release, A Crow Looked at Me, kicked off with one of the most gut-wrenching songs I have heard in all my years of music listening. Phil Elverum, the man behind the Mount Eerie moniker, sings clearly with a solitary guitar strum: “death is real, someone’s there and then they’re not, and it’s not for singing about, it’s not for making into art.” A lot of people I tried showing this album to turned it off seconds into this track, I guess due to how present the artist’s grief was within his art, which makes some people uncomfortable. This is understandable, as this clear, blunt portrait of one’s private is unusual, but it’s a shame because Crow was one of my favorites of 2017. While it deals with death much more directly than most music, the emotion, vulnerability, and sparseness of the instrumentals pair beautifully with the lyrical content, putting me into a contemplative and meditative mindset, unique to itself.

Cue this year’s Mount Eerie LP, Now Only. This album is virtually a direct sequel to last year’s album, both collections mourning the loss of Phil’s wife to cancer. While the songs on Crow laid bare the raw emotion and pain experienced in the wake of loss, Now Only is a different beast entirely. These songs are some of the most thoughtfully-penned in Phil’s large discography, spanning the work of both the Microphones and Mount Eerie. In place of the bare minimalism of Crow, this release works to nurse the wound that was so naked to the world this time last year, through more varied and textured songs. Phil takes queues from the wandering, unrestrained, stream-of-consciousness style of Mark Kozelek (Sun Kil Moon), with two of these six tracks weighing in over nine minutes. These long-winded numbers explore previous experience with loss, other art, and memories with his wife, constantly weaving in and out of metaphor in a heartbreakingly beautiful way. These songs are especially flooring on repeated listens, giving each thought and allusion elsewhere a chance to stick.

Some of the other tracks on Now Only show off Phil’s more atmospheric tendencies, seen previously on Microphones releases as well as the black metal-influenced Wind’s Poem in 2009. On the other hand, the title track is an honest-to-goodness pop song, with an infectious piano hook paired with the lyrics, “people get cancer and die.” The way these seemingly opposite approaches to songwriting are packaged into the album, without sacrificing cohesiveness, is impressive, and as fans of the person behind the music, refreshing. We all hope to see Phil heal, and the regeneration of his artistic ambitions after such an awful time in his life feels like a step in the right direction. The open wound of Crow was truly devastating, and brave to release; but its sister album, Now Only, feels like a work of art in its purest form, simultaneously thought-provoking, personal, and real.

This review was edited by Derek Adams of the WPTS Editorial Board.