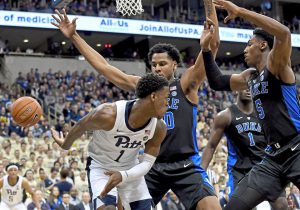 by Phil Stein and Sean Magguilli

After last year’s firing of Kevin Stallings on March 8th, the head coaching search became the biggest story in Pittsburgh basketball. After announcing Duke’s assistant coach Jeff Capel as the Panthers’ new head coach, all eyes immediately looked ahead to January 22nd, the next Pitt-Duke game.

Finally, it was time for the biggest game of the season. The students, and easily the biggest crowd all year, poured into the Peterson Events Center hours early for a chance at better seats. Some of them were lucky enough to meet Coach Capel as he handed out pizza and displayed some serious Panther pride. Game wise, fans did not have any delusions of grandeur about Pittsburgh’s chances against the number two team in the nation, but the fan base clearly showed that they are behind Capel and believe in him to complete this rebuild.

Pittsburgh could not hang with Duke because of consistent struggles on offense, and trying to keep Zion Williamson from the rim is basically impossible. They did outscore Duke in the second half, 39 to 35, but it was not enough to overcome their halftime deficit. Regardless, most everyone in the Zoo stuck the game out until the end, and showed what it meant to truly be a four quarter fan base.

The Panthers play their next game at #23 Louisville, this Saturday, January 26th.