“One” by Homesafe – Review 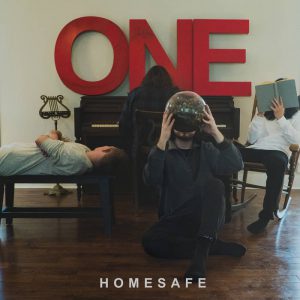 The year 2018 has been full of amazing releases so far, that’s for sure. One more to add to the list is Homesafe’s One. Homesafe, a four-piece rock band based in the suburbs of Chicago, released their debut full length with Pure Noise Records on June 29, 2018, and just wrapped up a headlining tour with Hot Mulligan, Heart Attack Man, and Jetty Bones. Drawing inspiration from bands like the Foo Fighters and Third Eye Blind, One sounds like the perfect marriage of 90s rock and new-age alternative pop punk.

The album starts on the right foot with no-nonsense, guitar-heavy song “Point Blank,” which has an infectious energy to it, setting the tone for the album. The next song, “Run,” is arguably the most catchy song on the album, and the tracks to follow all keep up the same energy. Slightly darker and politically inspired, “Sadistic Society” will leave listeners wanting to scream along to lyrics they didn’t know they needed to hear. “Get It Right,” a song with wildly different meaning, has a similar effect.

“Stay Away,” one of three singles from the album, is a departure from the band’s usual sound. Presented as an emotional and lyrically-driven ballad, the song breaks down in the bridge and leads seamlessly into the following tracks, impressively, without disrupting the flow of the album as acoustic tracks tend to do.

Another single, “Vanilla Scented Laser Beams,” is a refreshing take on typical pop-punk-esque songs about relationships with generally positive lyrics, a distinct sing-along, and slightly more of a pop feel to it. Tracks like “Time Ain’t Free” and “Suits and Ties” have memorable guitar leads and powerful bass lines. The record ends on a slow note with heartache piece “Sideways Sleeper” and an instrumental outro track, which brings some closure to the bouncing-off-the-walls energy of the previous tracks, yet doesn’t outshine it.

This release follows album Evermore (2016) and EPs Inside Your Head (2015) and Homesafe (2014), and brings a more refined, unique sound while still staying true to the band’s original influences. Pop-punk records have a tendency to be made up of songs that mostly sound the same, and One is an impressive departure from that, with tracks bringing listeners through a variety of emotions and beautifully conveying themes of personal growth, belonging, and understanding. There are several ballad-like songs that are generally quieter and slower than what one would expect on a rock album, which sets One apart from the numerous other releases in similar genres this summer. However, the band still fits perfectly into the scene and sounds right at home after touring with bands like Boston Manor, State Champs, and Knuckle Puck.