On Wednesday, September 25th, a controversial article was published by The Pitt News criticizing “prowling upperclassmen” asking to be swiped in to the University’s largest dining hall, Market Central. The “Market Central Moochers” described in The Pitt News’ opinion column are top shelf examples of humanity, toting perfect social lives, Rhodes Scholar level grades, and extravagant off-campus kitchens (yeah, right). But that’s not all: they also prey on unsuspecting freshman for free food that they clearly don’t need. Right?

Originally published as an opinion piece, editors added a post-outrage note stating that “this column was originally mislabeled as opinion. It was written intentionally as satire.” Here’s the thing, though: food insecurity is not, nor will ever be, funny.

What is Food Insecurity?

As defined by the USDA, food insecurity is a lack of consistent access to enough food to achieve an active and healthy lifestyle. It’s not necessarily about living in a food desert (or a food apartheid, considering that lack of food access has a significant correlation with systematic oppression of people of color). Even if you lived right next to Oakland’s very own Forbes Market, you could still go hungry. If it isn’t affordable, it isn’t accessible.

That being said, food insecurity is seen in large instances in low income areas and low access areas. Low income areas are defined as having poverty rates above 20%, and low access areas are defined as being “where at least 100 households that do not have a car are more than ½ mile from the nearest supermarket, super center or large grocery store.”

And, as opposed to the narrative put forth in TPN’s “Market Central Moochers,” food insecurity isn’t necessarily what you think it looks like. Greater Pittsburgh Community Food Bank says it best: “Hunger in southwestern Pennsylvania is not always visible. But it almost always means that people are making tough choices between important basic needs, such as housing or medical bills, and purchasing nutritionally adequate foods. Those choices lead to poor health outcomes—undernourishment, obesity, diabetes and stress.”

According to city data, the areas in the city of Pittsburgh that face the highest instances of food insecurity are mapped below. Although some areas look “green,” they can still be facing food insecurity rates up to 27%. 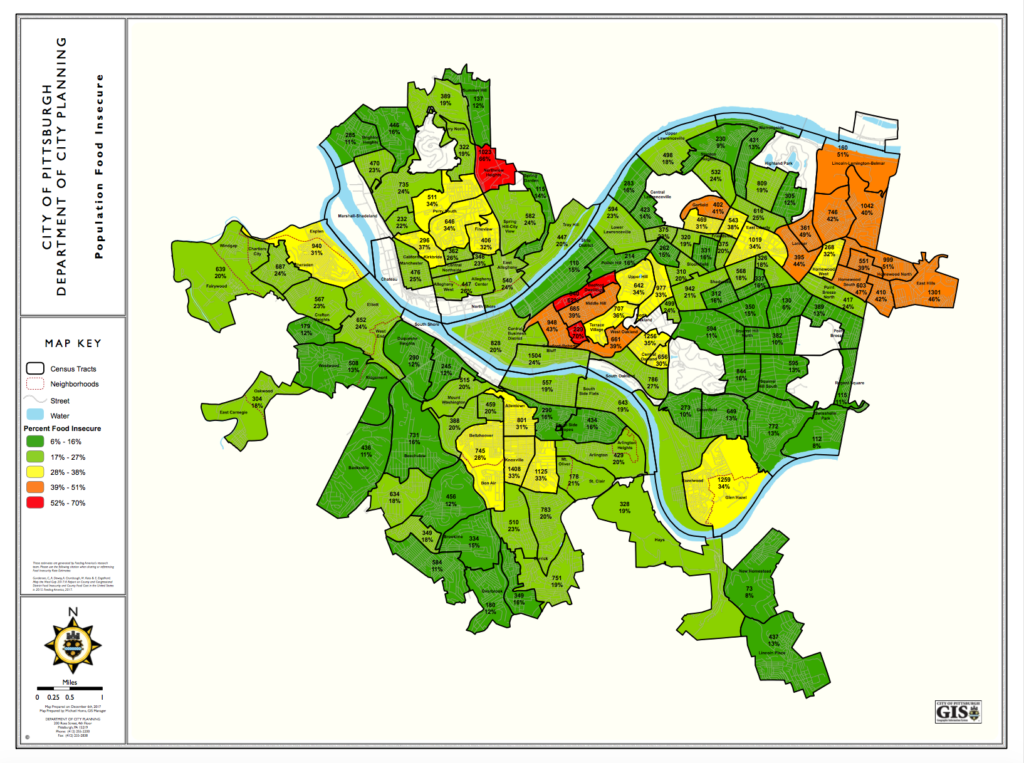 Just this month, The Hope Center published a report on the state of food insecurity on Denver college campuses and found that 40% of respondents experienced food insecurity in the past 30 days. National studies estimate student food insecurity at about 33%, although recent studies show that number may be way off.

In 2018, the Greater Pittsburgh Community Food Bank published a study specifically analyzing college food insecurity in Southwestern Pennsylvania. Eleven area colleges and universities participated in the Campus Cupboard Study, including Pitt’s Oakland campus. Of 6,222 respondents, researchers found that 29% of Southwestern Pennsylvania college students are food insecure, consistent with current national averages. According the map above, an estimated 3,000 people are food insecure in the South and Central Oakland area alone.

The Campus Cupboard Study also found that the highest rates of food insecurity (40% and up) were most common among students of color, first generation students, those with children and those who are financially independent. Food insecurity was also associated with lower GPAs and suffering mental/physical health.

So, please: forgive me for not finding the pervasive reality of food insecurity to be “funny.”

Maybe next time, the Pitt News will leave the satire to The Pittiful News.