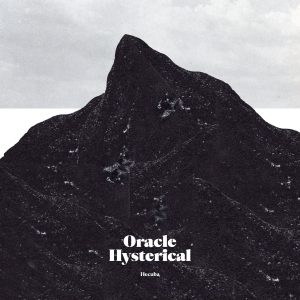 Before I get into reviewing Oracle Hysterical’s Hecuba, I first want to convey that they’re part band, part book club. You might call this a… novel concept. Jokes aside, Hecuba is based on the ancient Greek tragedy by the same name, in which a queen—Hecuba—attempts to rescue her daughter, who is due to be sacrificed. Along the way, she finds that her son has been murdered, and interrupts her mission to get vengeance on her son’s murderer. That’s about where I’ll end the description of the original “Hecuba,” because I basically consumed this album as a standalone work, and that’s how I’d expect anyone else to consume it.

That said, this album blew me away. There were a couple times where I had to pause, step back, and recollect myself, let the chills finish running through my body. The presumed goal of an album based on some other work is to rise to the original. Again, I don’t know how I’d feel if I were to read a translation of “Hecuba,” but the themes of fury, confusion, and loss are brought into modern music with utmost clarity and intensity. The musicianship of this album makes me suspect that Oracle Hysterical’s members are all classically trained. Whether they are or not, the balance and fullness of each instrument and voice is something to behold, truly. It’s a level of musical immersion that I’ve not felt via my computer’s speakers in a long, long time—maybe never before. Sometimes I forgot I was listening to instruments played by human beings, it was just music.

The album starts off with “Helen,” which builds from an open soundscape with urgent percussion into an open-wide high end with a driving rhythm section groove. It sounds experimental, but the song that reveals the extent of the weirdness of the album is the second track, “100 Tongues.” Again, the percussion is the main engine for intensity, from which the singer can convey anger in her pristine voice. The unconventional percussive instruments and the use of clipped breathing and vocal percussion from the singer towards the end of the track brings the music to the same surreal space that the lyrics dwell in. “He Will Close Your Eyes” is practically divided into two parts, and when the first bleeds into the second is when Hecuba transitions from the anger and urgency into something beautiful, namely these double reeds that just melt away at all the tension from before, giving way to regret. I think this is so smart on the part of Oracle Hysterical, because whereas there’s never much solace to be had in ancient Greek tragedies, there’s a lot of back and forth between the angry, vengeful, impulsive side of Hecuba and the remorseful, reflective side. Oracle Hysterical uses the latter of those two moods to achieve catharsis against the tension of the former. “Where Did You Go?” sold me on this album for its chills-inducing beauty, especially from the two vocalists and the juxtaposition in their perceptions of their story of separation. Tension comes and goes after that point in the album, often with beauty being layered directly on top of crunchy background instrumentals in “Bolero” and the outro of “Galaxies,” all till a final exhale in “No Comfort.”

I really don’t feel like I have anything bad to say about this album. Of course, there are myriad things I don’t understand about this album solely because I haven’t read “Hecuba”: I don’t know who Helen, Leto, Cassandra, or just about any other characters are, nor do I know what 100 tongues have to do with anything at all. But on a visceral and emotional level, all my questions were answered. And of course the experimental or weird sounds are, well, weird. But that’s welcome when there’s an explicit purposefulness to the weirdness, it’s not just there to sound artsy or edgy or different. Hecuba by Oracle Hysterical is an obligatory listen for its multifaceted depth; for its inspired, surreal concept; and its cinematic, striking execution.