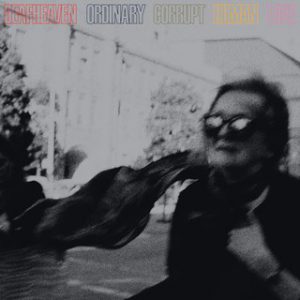 Ordinary Corrupt Human Love is the fourth LP by the blackgaze band Deafheaven. The band came into the spotlight with their 2013 release Sunbather, which received praise from critics outside of the metal community, introducing it to those who may not usually venture into this harsher type of music. I was very much a fan of this release, but I thought they took a step backwards with their 2015 follow-up, New Bermuda, which took a more streamlined, straight-forward black metal approach and cut out the more indie aspects of their music. It took away a lot of what I like about Deafheaven, which has a kind of nostalgic feeling that sets them apart from other black metal artists. With their new release, I was hoping for some more risk taking, and incorporating more of the indie-inspired passages that were present in Sunbather. I happy to say that they have met these hopes in the new album.

“You Without End” kicks off this seven-track album with some piano and easygoing guitar work. A woman recites poetry over the instrumentals, and while this may sound somewhat cliché, it makes for a good introduction and sets the mood of Ordinary Corrupt Human Love. The band also utilizes clean background vocals that really help tie the elements together. The clean vocals are one of my favorite parts of this album. They are used throughout, but very sparingly, and help to really add to both the more elegant and triumphant sections.

“Honeycomb” is the next track on the album, and is one of my favorites. It’s a perfect example of how Deafheaven is able to fuse black metal and indie elements, in addition to their free-flowing songwriting style, which I believe they do better on this album than any of their others. The songs are structured in a more progressive way, but they blend seamlessly and don’t seem to wander without reason. “Canary Yellow,” the third song on the album, is stylistically similar to “Honeycomb,” but it includes a quieter passage about eight minutes in that I love. The lead guitar sounds so mysterious in this section, and the drums accompany the other instruments well by utilizing snare rolls followed by hi-hats that are left to hang for a second, all capped with the excellent clean vocals included in the outro.

The fourth track, “Near,” is somewhat of an interlude. The vocals have a dream-like, echoing quality to them, similar to something like Giles Corey. It’s a great lead-in to “Glint,” which is probably the most heavy-hitting track on the album. The near three-minute intro sounds much like 2000s post metal, more specifically the atmospheric kind (Isis, Alcest, etc.), but it then breaks into a flurry of blast beats and tremolo-picked guitars. The track finishes with a guitar solo that does a disservice to the rest of the song: it seems very much out of place and takes away from the atmosphere the previous nine minutes labored to create. Although this is my least favorite solo, I will mention that I think all of the solos on the album feel out of place to me. They all feel like they belong on a classic rock album, not a Deafheaven album. Don’t get me wrong, they are nice solos isolated by themselves. They just clash so much with the rest of the mood Deafheaven creates.

“Night People” is the next track, and features Chelsea Wolfe as a guest vocalist. The song sounds very similar to her style, and I wonder if she had a hand in the songwriting process here as well. George Clarke sings in a duet style with her, and the instrumentation is kept simple so that the vocals take center stage. Although I might like this song in a different setting, it seems really out of place on the album. It sounds more like it’s more of a Chelsea Wolfe track that features Deafheaven, rather than the other way around.

The album closes with my favorite song on the album, “Worthless Animal.” This is such a great finisher. The song begins pretty calmly despite the harsh vocals. The bass provides a great backbone for the light guitars, and when the song does pick up it still retains a calming aura about it. Five minutes in, the lead guitar introduces a soaring riff that carries the remaining five minutes of the song. It fades out with this riff still going. It’s a satisfying closing that feels like a good representation of the album as a whole.

Overall I love the direction that they take with this album. It feels fresh and inspired, incorporating new ideas like the cleaner vocals, but it also is somewhat of a return to form, including elements such as the instrumental segways of Sunbather. This record proves to me that Deafheaven is willing to take risks, and it pays off. If you like Deafheaven’s previous work, I think you’ll like this album, and if you’re new to the band, this is a great place to start.