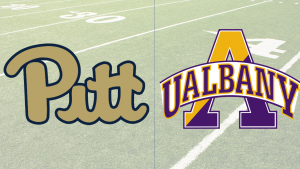 2017 Record: 4-7 (2-6 CAA)
The Danes started off the season strong last year, opening up 3-1 with the loss a close 31-17 defeat at FBS foe Old Dominion and a 19-10 win over former Pitt opponent and then #7 Villanova. They would then proceed to lose their next 6 games, 4 of them by double digits including two that went into overtime. They would close out the season with a 15-0 win over New Hampshire to end up at 4-7.

Coach: Greg Gattuso (21-24, 118-56)
Coach Gattuso has many ties to Pittsburgh and surrounding areas, growing up in Pittsburgh and then attending Penn State. Gattuso had a stellar career as an offensive lineman and even won a national title with the Nittany Lions. After a graduate assistant job at Penn State and several stops in the high school ranks Gattuso ended up as the head coach at Duquesne. He spent 12 years at the helm of the Dukes program, compiling a 97-32 record. He then was an assistant here at Pitt from 2005-10, first serving as the tight end coach and then as the defensive line coach and assistant head coach. After three years at Maryland he was hired as the head coach of the Great Danes.

Potential Panther Killers: Vincent Testaverde (#14 QB), Elijah Ibitokun-Hanks (#24 HB), Josh Wynn (#23 S), Mason Gray (#8 S)
If Albany wants to spring an upset these four players will likely lie at the heart of their effort.  Testaverde, a grad transfer senior quarterback and the son of NFL and Miami legend Vinny Testaverde, was good enough to earn spots on the rosters at Texas Tech and Miami. He will have to bring power 5 talent to the table if the Danes want to spring the upset. While Testaverde represents the unknown element to Albany’s attack, Elijah Ibitokun-Hanks represents the proven commodity. Even though he only played in one game last year because of injury in 2016, he rushed for 1401 yards and 16 TDs.

On the defensive side of the ball Albany has two sure-tackling safeties that provide them with a reliable backstop. Wynn and Gray totaled 74 and 71 tackles each in 2017, coming in 2nd and 3rd on the team. The dynamic senior duo will have to hold their own in pass coverage while also providing excellent run support against the Panthers powerful rushing attack, but judging by their careers it seems they could be up to the task.