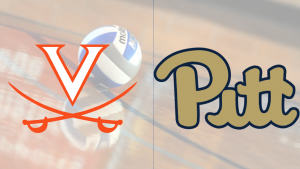 Pitt was able to get to a small early lead in the first set and fought to hold that lead throughout the set with the Cavaliers keeping it within 2 or 3 points until the Panthers ripped off 4 straight points behind the strong serving of Kamalani Akeo to take their lead from 17-15 to 21-15. UVA would make it 21-16, but the Panthers won 4 out of the last 5 points to take the set.

The second set was a set of runs as, after an even start, Virginia won 7 straight points to take a 14-6 lead. The run was spearheaded by  strong serving from Jennifer Wineholt and strong attack play from Jelena Novakovic and Alex Spencer, who led Virginia with 9 and 8 kills. The lead eventually reached 16-8, and it was then that the comeback began for Pitt. The Panthers would win 5 straight points before dropping the next 3, clawing it back to a 19-13 deficit. After a crucial timeout by Pitt coach Dan Fisher, the Panthers would rip off 12 of the next 15 points to take the set and put Virginia up against the ropes.

In the third, Virginia played like a team whose back was against the wall, and it would pay off as, after a fairly even start, they were able to take leads of 17-14 and 19-16. The Panthers, however, had an extra gear to reach as they won the next 7 points and 9 of the next 11 to take the set and the match, finishing it off with an emphatic service ace by Pittsburgh native Angela Seman.

Up next for Pitt is a date in Blacksburg with Virginia Tech, who boasts a 9-3 record but is coming off back to back losses to #18 Baylor and UTSA.