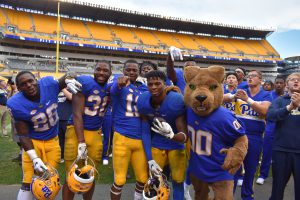 Pitt defeated Syracuse 44-37 on Saturday in a back-and-forth contest interrupted by a 3rd Quarter weather delay.  Syracuse got off to a hot start scoring two touchdowns and forcing a fumble to take a 14-0 lead less than ten minutes into the game. Pitt struck back scoring 14 points in less than 90 seconds. A 69-yard rush by Qadree Ollison was the first Pitt score. Then, Quintin Wirginis forced a fumble which was picked up by Dane Jackson who took it 35 yards for a touchdown to tie up the game. That fumble was a turning point for Pitt’s defense in the first half as they forced Syracuse to punt from their own end zone and throw an interception. Unfortunately, Pitt couldn’t do much offensively and was forced to lean on kicker Alex Kessman. Kessman set the record for longest field goal at Heinz Field twice, kicking 54 and 55 yard field goals. Syracuse got within 4 thanks to a field goal by Andre Szmyt. Kenny Pickett threw an interception near the end of the first half, but Syracuse didn’t have the time to capitalize on it. Pitt had a 20-17 lead at the break.

Pitt started off the second half really hot as Pickett threw a 68-yard touchdown to Rafael Araujo-Lopes on the third play of the half. Unfortunately, the game had to be delayed at that point due to weather. When the game continued, Syracuse took over.  The Orange scored 17 straight points to take a seven-point lead in the 4th. Pitt drove down the field and scored a touchdown, tying up the game. Syracuse was able to get a long field goal of their own as Szmyt kicked a 54-yarder to take the lead with six minutes left. Kessman saved the day once more as he kicked a 45-yard field goal with eight seconds left in the 4th to send the game to overtime. In OT, Pitt ran the ball five plays in a row with Darrin Hall scoring a touchdown on the fifth. On Syracuse’s first play of overtime, Therran Coleman intercepted a pass by Eric Dungey to secure the win for Pitt.