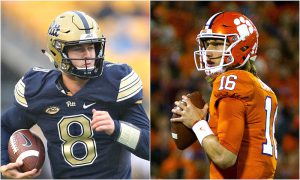 Under the lights of Bank of America Stadium in Charlottesville North Carolina, the Pittsburgh Panthers gave a heroic effort against America’s best defense. Falling 42-10 to the 2nd ranked Tigers, the Panthers struggled mightily to pass the ball, as well keep the furious Clemson offensive specialists and defensive line under wraps. For the fourth-straight year in a row, Clemson has won the ACC while simultaneously clinching their fourth-straight appearance in the college football playoff alongside the likes of Alabama, Notre Dame, and Oklahoma.

For the Tigers, it was ACC offensive player of the year Travis Etienne who shredded the Pittsburgh defense. Catapulting the tigers to a 7-0 lead off a 1st play, 75 yard touchdown run, Etienne finished the contest with 156 rushing yards on just 12 carries (13 yards per carry) and two touchdowns. In addition, Tiger receivers played an equal role in the Panthers demise, totaling 3 receptions for 36 yards and two touchdowns. Playing up to their pedigree, the Clemson defensive line proved why they are the best in the country- Christian Wilkins and Dexter Lawrence both wreaked havoc in the Panther backfield giving Panthers quarterback Kenny Pickett fits all night.

For the Panthers, coming into last night’s match-up was a challenge of enormous proportions despite a history of success against top ranked squads. Coming into the 2018 ACC Championship game, the Panthers actually boasted an undefeated record against the Tigers, with their most recent and memorable victory came against them in a 2016 shootout in Death Valley.  Panthers Head Coach Pat Narduzzi also entered the game undefeated against #2 teams (the team upset Miami last year in the last regular season game of 2017), while the team itself has not lost to a top 3 team since 2002. However, it was the combination of costly turnovers that Clemson turned into two touchdowns which cost the Panthers any hope of turning a second-half comeback.

Down only 11 in the closing minutes of the second quarter, Pickett throw a costly interception which allowed the Tigers to extend the lead to 18- in turn killing any Panther momentum up that point. For Pickett, the biggest game of his career was unfortunately, statistically his worst. The Sophomore was 4-16 for a 8 total yards and 1 interception. Without a doubt, the Clemson defensive line played a huge role in Pickett’s low numbers, although throughout this season Pickett has had only a single game of passing more than 200 yards all year long.  Notably, Pickett tossed for 137 against Syracuse, 126 against Notre Dame, 61 against Virginia,  and 55 against Penn State. Going forward, it appears that Pickett will be the man under center in 2019 despite rumblings of “game manager” now being tossed around.

A team reliant on a balanced rush-attack, the Panthers were still able to put up solid numbers on the ground. Running back Darrin Hall had 14 carries for 86 yards for an average of 6.1 yards per carry. Comparatively, all ACC 2nd team running back Qadree Ollison went 13 carries for 56 yards, 4.3 average, and 1 touchdown. Before this game, the double-headed dragon of Ollison and Hall had accounted for nearly 2,100 rushing yards, a feat which has allowed Pittsburgh to steal victories like that of an overtime game against Syracuse . For the Special Teams, Pittsburgh was not able to convert a punt or kickoff return for a touchdown the way many fans and experts had hoped would be catalyst for an upset. Rafael Arujo Lopes had 2 receptions for 10 yards, V’lique Carter accounted for one catch for two yards, while Darrin Hall had one catch for a -4 yards. In essence, this was a game Pittsburgh was expected to lose by 27.5 points. While the spread was more than covered, this has been a tenacious, gritty squad whose furious play amidst on of the toughest schedules in college football this year resulted in a birth in their first ACC championship game- a feat that very few saw happening this August.