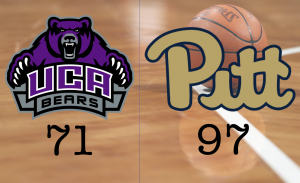 The Pittsburgh Panthers are now riding a four game win streak after beating the Central Arkansas Bears 97-71 on Thursday night. The young Panther squad continued to impress under head coach Jeff Capel. The Panthers’ scoring was led by senior guard Jared Wilson-Frame with 20 points, marking the third game in a row that Wilson-Frame has led the team in scoring. Au’Diese Toney and Malik Ellison both chipped in for 15 and 13 points, respectively, on the night. Terrell Brown also put up solid numbers with 8 points and a team leading 8 rebounds.

Pitt got off to a slow start as they were down 17-8 early in the game. They would go on to claim their first lead of the contest with 11:45 remaining in the first half. The remainder of the half was all Pitt as Central Arkansas kept the game close until the final four minutes of the half. That is where the Panthers started to pull away and went into halftime with a 48-37 lead. Freshman guard Xavier Johnson only saw the floor for three minutes in the half after two early fouls. He would complete the game scoring 12 points.

Both teams traded baskets at the beginning of the second half, matching each other’s scoring. A Jared Wilson-Frame three, one of his four on the night, opened the game wide open. Pitt kept their foot on the gas and did not look back, and they flat out dominated the rest of the game. Pitt went on a 24-7 run that was capped off by a ferocious dunk by Trey McGowens who finished the game with 11 points. The Bears’ scoring was led by Thatch Unruh who dropped 15, all scored in the first half. Pitt forced 23 turnovers on the night, and that was one of the ingredients to this Panther victory. The game started off sluggishly, but ultimately the pedigree of Pitt showed its
colors and led to a 26-point win.