Panthers strike early and often against Georgia Tech, hold on for 24-19 win 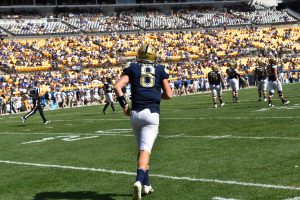 A hot and humid afternoon in Pittsburgh couldn’t slow a team eager for redemption as the Panthers took care of business, handling Georgia Tech for the win.

Pitt got the run game going early when a 31-yard play by Qadree Ollison found the end zone. A failed fourth down conversion by the Yellow Jackets on the ensuing drive helped start an impress dominance by the Pitt attack. Just a minute and six seconds later, Darrin Hall took a 5-yard run the distance to put the Panthers up 14-0. From there, the teams struggled back and forth, trading two punts each. The Yellow Jackets couldn’t quite find their footing, riding the coveted triple-option to limited success throughout the first half. When they finally did show some life midway through the second quarter, an ambitious (albeit failed) fourth down attempt left them scoreless. The Panthers capitalized, going 77 yards in 4 plays to close the half up a comfortable 21-0. A brief exit by Pitt QB Kenny Pickett reminded those in attendance that the game was far from over.

Georgia Tech wasted little time responding in the second half. Their opening drive went 10 plays and 75 yards, capped off by a goal line touchdown from senior quarterback TaQuon Marshall. A missed extra point left the Yellow Jackets down 21-6 with plenty of time to play. The Panthers answered with a 33-yard field goal at the tail end of a six-minute drive. It was at this point that Pitt’s discipline became an issue again. After swapping brief turnovers, Georgia Tech took advantage of a face mask call that reversed a possible fumble on their own 25 yard line. The Yellow Jackets went on to score another touchdown, missing a two-point conversion thereafter. It took almost 13 minutes for either team to score again. Pinned deep, Georgia Tech drove a full 99 yards before reaching the end zone on a short side pitch to wide receiver Clinton Lynch. For the first time all day, the Yellow Jackets special teams converted. The score stood 24-19 with just under a minute left. The ensuing play, a botched onside kick to the sideline, sealed the Panthers fate, pushing them to their first ACC win of the season.

With seven straight losses on the road, Georgia Tech will look to bounce back next Saturday as they host #2 Clemson. The Panthers are back in action next Saturday at UNC for their first road game of the year.