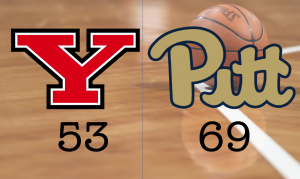 The Jeff Capel era began with a win Tuesday night at the Petersen Events Center in a contest between the Pittsburgh Panthers and the Youngstown State Penguins. The Panthers won 69-53 behind the freshman guard combo of Xavier Johnson and Trey McGowens. It was a close game for most of the first half with the score staying within 10 points the whole half, but after being tied at 27 for a short time early in the second half, the Panthers pulled away and won by 16. Pitt led the game for just about 35 minutes of the 40-minute game, and the 5 minutes the Penguins led came in the first 5 minutes of the game.

McGowens had a team-high 17 points on 6 of 11 shooting, while Johnson put up 16 points and 6 assists in 31 minutes after playing just the first half in Pitt’s exhibition game against Pitt Johnstown due to injury concerns. Other notable contributors were Malik Ellison with 13 points, Au’Diese Toney with 12 points and 9 rebounds, and the real surprise of the game, Kene Chukwuka with 7 points and 8 rebounds off the bench.

The Penguins’ big contributors were Darius Quisenberry with 7 points, 4 assists, and 4 rebounds, Naz Bohannon with 10 rebounds, and Kendale Hampton with 15 bench points.

The Panthers’ second game of the season is on Friday, November 9th at The Pete against VMI. Coverage will begin on WPTS Radio at 6:30.