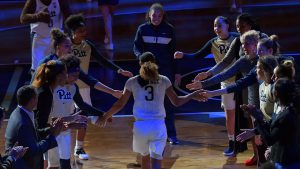 After a low scoring start to the game, the Pitt Panthers led the St. Francis Red Flash 3-2 with 4:43 left in the 1st quarter. Pitt kept pace with the Red Flash during the game as they led 17-10 at the end of the quarter. St. Francis went on a 14-4 run to take a 24-21 lead midway through the 2nd quarter.

Pitt struggled for the remainder of the 2nd quarter as St. Francis extended their lead to 12 at the half. Pitt forced St. Francis to take a timeout with 3:49 left in the 3rd quarter as they cut the lead to 6, 44-38. Pitt maintained their intensity after the timeout and the game was tied at 50 at the end of the 3rd quarter. Pitt led by 4 with 4:18 left in the game. The teams went back and forth in the last few minutes of the game.

The game was tied at the end of the 4th quarter and the game went to overtime. Pitt was able to take the lead and hold it thanks to great Free Throw Shooting and spectacular defense. Final Score: 78-75 Pitt