Penguins fortunes improve, but will trades be enough?

Since the last Update, the Penguins have gone 4–2, including four straight victories (second-longest streak of the season). Losses to the Capitals and Blue Jackets were reason for concern, but since then, the Penguins have really played solid hockey.

A victory over St. Louis started things off. The Pens won 4–2, and Blake Comeau had a three-point performance, singlehandedly matching the team’s performance from their past three games combined. Patric Hornqvist and Brandon Sutter also contributed goals.

A 5–1 win against the Panthers continued the offensive hot streak. Hornqvist scored twice, but Evgeni Malkin beat him with two goals—including the game winner—and an assist. Marc-Andre Fleury was stellar, with 34 saves and a .971 SV%.

The next game that week may have been one of the most important victories all season. The Penguins played the Capitals at the Verizon Center with a season sweep on the line. Washington had outscored them 10–1 in the previous matchups. This time, the Penguins won 4–3, with a score that was probably closer than the game. Hornqvist and Sutter netted first-period goals, Sidney Crosby added a power play marker, and Chris Kunitz contributed the eventual game winner. It wasn’t a great goaltending performance, featuring .875 and .846 save percentages.

The final victory of this stretch was a redemptive 5–3 victory against the Blue Jackets. Malkin contributed another three-point performance, giving him 5G, 6A in his last 5 games. David Perron scored a nice goal on the power play, one of three PPGs in the second period. Young defenseman Derrick Pouliot, who has impressed with his puck distribution on the man advantage, was rewarded with his second goal of the season. For the fifth goal, new acquisition Daniel Winnik got an assist on a shot by Steve Downie.

The games were obviously important, but this week will be defined by the results of Jim Rutherford’s trades. With the NHL Trade Deadline coming on Mondayafternoon, several transactions were made over the last few days. The transaction log follows. 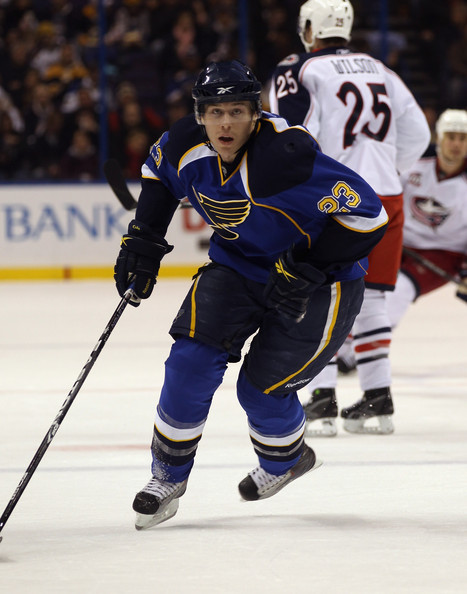 Daniel Winnik is a highly-regarded bottom-six forward, known for effectively driving puck possession, as well as having good size and speed. Winnik is considered an intelligent player, and members of the advanced stats community had advocated for his acquisition throughout the season. It’s possible that the price ends up being too high, but I think he adds a vital element to the Penguins depth.

Cole for Bortuzzo isn’t a huge upgrade, especially considering that it’s a swap of #7 defensemen. It could be argued that the loss of Bortuzzo’s physical presence will be an issue, but I had personally grown frustrated with his poor positioning on defense. Cole is a much better puck possession guy, and has played under Penguins assistant Gary Agnew. I see him as a much better fit for Mike Johnston’s system.

Unfortunately for GMJR, I don’t think he went three for three on his trades. Although it’s possible to argue that Ben Lovejoy is a better option this year than Simon Despres, I can’t get over how bad the Penguins asset management was here. Lovejoy is a former depth defenseman who was traded away two years ago, in exchange for a fifth-round pick. Many fans’ last memory of him is when he got absolutely obliterated by Jaromir Jagr in the playoffs against Philly. Despres is a former first-round draft pick who had seemed to make some big improvements this season. However, he had been slumping lately, and was prone to making frequent turnovers. Although he was a flawed player, his ceiling is extremely high. Big, smooth-skating 23-year-old defensemen don’t exactly grow on trees. Lovejoy is 31 and something of a known commodity. This year, he has been very effective for Anaheim at limiting opponents’ scoring chances. However, there isn’t a lot of top-end skill, and he probably reached his peak last season.

In my opinion, these moves reflect confidence by the coaching staff and front office in Derrick Pouliot. Since he was called back up a few weeks ago, he’s been getting increasing responsibility and playing time. There are still growing pains,but he looks more and more comfortable every game. The skating and puck movement are great, and he positions himself very effectively while backchecking. I think it’s very likely he’ll end up on the second pairing for the postseason.

Unless there are some remaining waiver moves, this is the roster the Penguins will be going with the rest of the season. (Obviously, the hope is that they will remain healthy enough for that to remain the case.) With a four-game winning streak under their belts, and a few reinforcements arriving, the Penguins have a lot to look forward to. However, they also have a lot to work on. With games against Colorado, Anaheim, Los Angeles, and San Jose in the next week, there will be some stiff tests against Western Conference contenders. Hopefully the Pens can keep up.