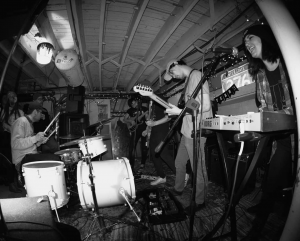 It’s a snowy night in Oakland. After a week of beautiful sunshine the Pittsburgh winter returns with 3 inches of snow in just an hour. But did this stop us from getting to the gig? Hell no!! This was one of the most stacked lineups ever in the Pittsburgh DIY scene with String Machine, Brightside, Teenage Halloween (from New Jersey), and Short Fictions playing. Not only that, but it is pretty rare for a show to fall on a Sunday night which leads to less of a party atmosphere than usual.

The night started out sour when the snow prevented me from making it to String Machine’s set, but according to the head of Teenage Halloween, Luke, it was beautiful and emotional. Thankfully, we were able to make it in time for the last part of a set that I was super excited for; Brightside. Brightside has been a Pittsburgh DIY stalwart for the better half of a decade. They finally seem to be gearing up to release a new album (possibly titled 2012) and played some new songs. They also played some of their old cuts such as the stellar “Stellar!!!” (haha) which closed their performance with its loud and swirling guitars and musings of “That was stupid I admit/ but at the same time terribly fun.” I find this line funny because it really encapsulates my own feelings towards decisions I have made at house shows in the past. There was definitely a calmer atmosphere around this show than many of the others I have been to. Most weekend nights we find moshing in these basements, but tonight was all about the music.

Next up were our non-locals for the night; Teenage Halloween. This punk band has some obvious Jeff Rosenstock influences and uses poignant lyrics about queerness, gender identity, and hating cops to rock a basement. They continued to thank everyone in the basement for coming out and seeing them on the snowy Sunday night, and put on a great show. I can see why this band has gained a name for itself throughout the DIY scene.

Finally, the last band and for me a set that I am always excited for, Short Fictions. I have seen them more than any other Pittsburgh band, and they were also in the lineup of my very first house show experience. Two things are expected at every Short Fictions gig: singing along and getting hype. This time that was even more expected than usual as their lead singer, Sam Treber, had lost his voice from tour and needed our help to add to the music he has written. Opening up with one of their newer, louder, and darker songs they set the tone for what was about to be an intense performance. After that, they sprang into their back catalogue of PGH DIY hits such as “Ellen” and “I’m Not Depressed.” Nearly everyone was screaming along the lyrics to these songs. Bodies were moving and heads were banging. As always, the set was short yet fun, loud and extremely well performed. That’s one thing I continue to notice in the DIY scene: just how good many of the people are as musicians. It makes me really hope some of them gain the recognition that they deserve both in Pittsburgh and beyond.