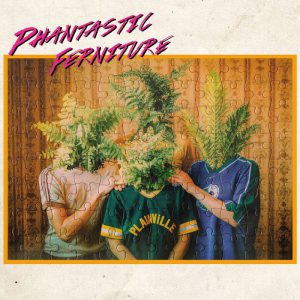 When I heard about Australian band Phantastic Ferniture, I didn’t know what I expected from a name that goofy, but the catchy garage-pop tunes found on this self-titled debut album are just as interesting as their name suggests. Phantastic Ferniture employ gorgeously fuzzy guitars to explore a garage-y sound in the same vein of many of their fellow Aussies (Courtney Barnett, Rolling Blackouts C.F., King
Gizzard circa Flying Microtonal Banana, to name a few). However, the soft voice of lead vocalist Julia Jacklin is what really sets this new band apart from their peers. It reminds me more of Adrianne Lenker of Big Thief than the aforementioned Barnett that Jacklin is regularly compared to. But like Barnett before them, Phantastic Ferniture came through with a collection of many well executed and enjoyable songs even though nothing on this album feels like exactly “new” or “progressive,” musically.

The album kicks off with “Uncomfortable Teenager,” the grooviest song in the tracklist with an opening guitar line that is a veritable earworm. As the song progresses, Julia Jacklin sings about the relatable subject of teenage depression. Some circling guitar work floats low in the mix as the vocals of “I don’t know why why/ I don’t know why why (I feel nothing)” fade out, allowing another great guitar line to bubble up at the beginning of “Bad Timing,” the lead single from this album. This song ponders an old relationship that Jacklin wishes had never ended. The front side of the album keeps the excitement rolling with another phantastic song in “F*ckin ‘n’ Rollin.” The chorus of this song is dangerously sticky, and I always find myself singing along with it. Track 4, “Gap Year,” is probably my favorite track on the album. It packs a level of fun and danciness in a way that many of the rest of the tracks on this LP just lack. After this stellar opening block, it becomes clear that the band had trouble churning out songs of the same caliber: the next three tracks are not nearly as memorable as the first four. However, Phantastic Ferniture are able to bring the album home strong with two more great songs, “Dark Corner Dance Floor” and “Mumma y Papa.”

This album made a great impression on me overall. While it is not unique in many ways, it is a very enjoyable listen. Sure, it deserves some criticism on its rehashed ideas in the back half, but it is totally understandable after great songs such as “Uncomfortable Teenager” and “Gap Year.” I fully expect to regularly revisit many of the songs on this nice debut album from this emerging band. I look forward to Phantastic Ferniture progressing and hopefully experimenting more in the near future.