Pickett, Panthers Look to Take Next Step in 2019 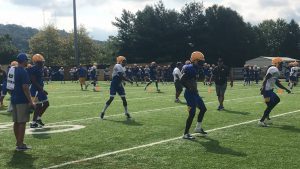 Tonight, the Pitt football team will hear from Curtis Martin, the Pittsburgh native and former Panther running back who went on to build quite the résumé in the NFL with the New England Patriots and New York Jets.  Also on the night’s agenda, voting for this year’s team captains, who will all be new to the role—last season’s group was led by seniors Dennis Briggs, Alex Bookser, and Quintin Wirginis.

And of course, there’s the highly-anticipated 7 PM launch of the ACC Network, the new ESPN-owned channel dedicated to coverage of the conference.  Tonight, you can tune in to catch a documentary on Duke basketball and Coach K, but nine days later, the energy and excitement of fall college sports will be the center of attention as the network airs Pitt hosting Virginia in each team’s opening game of the 2019 football season.

A primetime ACC contest to start a campaign is a rarity for Pitt.  It’s also the first time they’ll open a season defending the Coastal Division title.  A four-game win streak that started at the end of October and carried into mid-November clinched 1st place before the Panthers even played their final regular season game.

But Pitt still has plenty to prove.  In fact, some fans might have forgotten about that Coastal crown after a sour end to the season.  Pitt lost that final regular season game, an ugly 24-3 blowout at Miami, before the eventual national champions dominated the conference title game in Charlotte, and finally, Stanford edged out the Panthers by a point in the Hyundai Sun Bowl.  What once seemed to have the potential for a 9-win season—it would have been the first since a 10-win year in 2009—quickly turned into just a .500 finish.

One might even say that fans left a 5 and 7 2017 season more optimistic.  Kenny Pickett had been buried beneath quarterbacks Max Browne and Ben DiNucci, only to emerge in the team’s final game, the famous 24-14 win over then-2nd ranked Miami, in which he passed for 193 yards, rushed for 60, and had three total touchdowns.  That stunning display generated plenty of offseason excitement and prevented what would have been the first time since 1998 that the Panthers won as little as four games. A year later, he went 4 of 16 for 8 yards against Clemson in the ACC Championship, a performance that fans are now reluctant to let him forget.  In 2019, they’ll want to see the Pickett that shamed Miami’s “turnover chain” and stirred belief that the quarterback position was taken care of for the next three seasons.

While those watching from the stands might have been underwhelmed with Pickett’s performance in 2018, head coach Pat Narduzzi’s confidence in QB1 hasn’t wavered, and he’s noticed significant improvements since last winter.

Pickett also believes he’s become more vocal and confident as a leader, now that he’s established himself as the primary quarterback and continued to earn the respect of his teammates.

“Having a full season under my belt obviously is a lot different than going into a season not knowing really what to expect.  I try to be a leader out there, a coach on the field, someone who they can come to and ask questions and I have the answer for.  My leadership took a jump this season, and I’m just really excited to play with these guys.”

He’s eager to defend that Coastal championship and perhaps take a step further, a quest that begins on August 31st with the Cavaliers.  That scheduled vote for team captains, however, doesn’t seem to distract Pickett from the primary goal of winning football games.

Following the ACC opener, the Panthers will host Ohio before the conclusion of a 4-year series with Penn State, September 14th in Happy Valley.