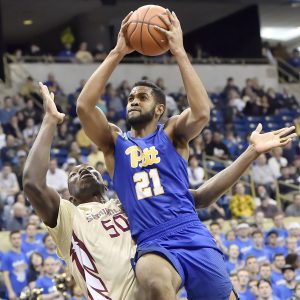 By: Jack Merlino
Pitt Stuns Florida State, 80-66
Two complete halves. One victory. Those two things have avoided the Pittsburgh Panthers almost as often as not this season. That wasn’t the case Saturday evening as Sheldon Jeter’s 29-point attack led the Panthers to just their 2nd victory against a ranked team in seven tries.
Once Pitt got a hold of their lead, they never let it go. For just under thirty minutes, the Panthers led in this ballgame, never letting the Seminoles pull any closer than three points in the second half.
In that second half, for a moment it looked like Pitt’s season-long second-half struggles might doom them to another heartbreaking defeat at home, but a mélange of free throws and Sheldon Jeter buckets ensured that Pitt’s lead would stay intact. Jeter led all scorers with 29 points, and was joined in double-digit scoring by teammates Jamel Artis (16), Michael Young (11), and Cam Johnson (10). For FSU, Xavier Rathan-Mayes led the scoring with 12.
Pitt, winners of three of their last four games, will hope to continue their recent winning trend against Wake Forest this upcoming Wednesday. A perfect finish coupled with a strong showing in the ACC tournament could mean a miracle berth in the NCAA Tournament.
FSU, winners of just five of their last 10, look to stop the bleeding against Boston College on Monday.