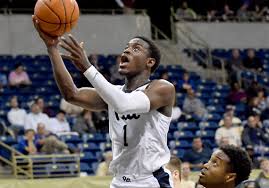 After nearly a week off the court the Pittsburgh Panthers Men’s Basketball Team returned to action at the Peterson Event Center against the Hawks of Maryland Eastern Shore. The Panthers came off a trying run of games in which they lost a tough one-point home contest to Niagara Purple Eagles, followed up by a tough loss to their hated rivals, the West Virginia Mountaineers in Morgantown. The two losses in five days pushed the Panthers to 7-3 on the season and left the Oakland Zoo hungry for the team to return to winning ways.

The Panthers answered the Zoo’s call. After falling behind 5-0 early, the Panthers went on a 26 to 3 run to energize the Panther faithful. Pitt’s stifling defense played a big part in their win as they caused four turnovers and held the Hawks scoreless for the better part of six minutes midway through the first half. The quick start carried the Panthers through the rest of the half as at the interval the Panthers took a 38-17 lead to the locker room. The first half saw eight different scorers for Pitt, led by their emotional leader Jared Wilson-Frame who added eight points, nine rebounds and three assists to the Panther cause.

The second half was another showcase of the Panthers dominance over the Hawks as a team they were able to grow the lead from 21 to 30 points with a quick 9-0 run in the first three minutes of the second half. The big story of the second period for the Panthers was the continued great play of the Panther bench that put up 41 total bench points as compared to the Hawks who only managed one point off the bench. When it was all said in done at the final buzzer Pitt cruised their way to a 78-43 win over Maryland Eastern Shore.

The return to winning ways for the Pitt Panthers Men’s Basketball team mean that their record now moves to 8-3 on the season with two games remaining before ACC play begins in the start of the New Year. The Panthers will look to keep the momentum gained from a dominant performance going when the take back to the court against the New Orleans Privateers of the Southland Conference on December 20th back inside the comfy confines of the Peterson Event Center.