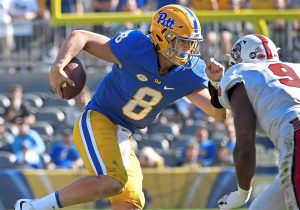 Pitt football quarterback Kenny Pickett speaks with our very own Jason Earle and Seb Curtin on his first year as a Panther and what to expect in his upcoming sophomore season.  Pickett is well-known for leading Pittsburgh to an incredible upset win over the second-ranked Miami Hurricanes in the Panthers’ final game of 2017, a victory that shocked the college football world.  Named one of ESPN’s ACC Players to Watch for 2018, the rising sophomore will aim to accumulate more success as Pitt’s starting quarterback.