Pitt Hopes for a Brighter Future 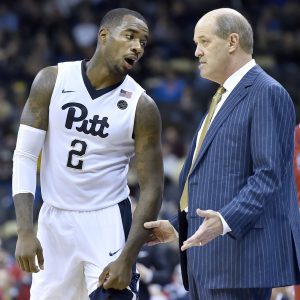 Those were the first words out of Sheldon Jeter’s mouth reflecting on the past season in the locker room following Pitt’s (possibly) season ending 75-63 loss to the Virginia Cavaliers in the second round of the ACC Tournament. It was an apt analysis of what was a tumultuous and disappointing season for Pitt basketball.

When Jamie Dixon shockingly left Pitt for his alma mater TCU last March, many wondered the direction new Athletic Director Scott Barnes would take the team. There were dreams of one of the Miller brothers jumping ship to come back home to Pittsburgh. Some believed assistant coach and Pitt legend Brandin Knight was the right guy for the job. Ultimately, Barnes landed on 23-year coaching vet Kevin Stallings who had spent the previous 17 years at Vanderbilt. Many Pitt fans were skeptical of the hire, considering Stallings had never made it past the Sweet Sixteen in NCAA tournament play. After a tournament appearance in the 2015-16 season, the fan base was looking for a coach who could continue the improvement of a veteran group, highlighted by four rising seniors in Jamel Artis, Michael Young, Chris Jones and the aforementioned Jeter. For many, Stallings did not necessarily fit the bill, though Stallings was faced with a number of challenges from the get-go.

While this team was highlighted by those four seniors, they lost their leader on and off the floor in James Robinson. At the beginning of the season, it seemed that Stallings’ only choices to replace Robinson were sophomores Damon Wilson, a guy who increasingly ended up in Jamie Dixon’s doghouse the year before, freshman Justice Kithcart, or junior and JUCO transfer Jonathon Milligan. There was also JUCO transfer Crisshawn Clark who projected as a combo guard player before he suffered a season ending knee injury (his second in as many years). Ultimately, Stallings found none of these options particularly appealing and decided to shift Jamel Artis from the 3 to the point guard position. Artis improved in that role throughout the season, but was never truly comfortable there, indicative of the bigger problems with the roster left by Dixon.

Pitt was surprisingly successful in non-conference play, going 11-2 including victories over tournament bound teams like Maryland and Marquette. But there were certainly warning signs, most notably the 9-point loss to Duquesne in the annual City Game that ended a 15-game winning streak for Pitt in that matchup. In that game, Mike Young shot 1-11 from the field in the second half, proving that when one of their scoring duo of Young and Artis struggles, the team gets put in a tough spot.

As ACC play began, they put up great fights against some of the ACC elite, going 1-3 to begin their ACC schedule but showing promise that they could compete with the best. However, the Panthers were bit by the injury bug, as key reserve Ryan Luther went down with a foot injury against Louisville that would knock him out for the next 11 games. Pitt followed that up with the two worst losses ever at the Peterson Events Center, a 26-point defeat to Miami and a 55-point demolition at the hands of Louisville. Losing Luther highlighted the major concern with this Pitt team: a lack of depth. Young and Artis were the top scoring duo in the ACC, and Sheldon Jeter was a force all season long on both sides of the floor. In the end, the Pitt bench was not capable of keeping up with ACC opponents, and the team went 4-14 in ACC play to fall to 15-16 on the season, rendering the NCAA tournament out of reach and the NIT a long shot barring a run in the ACC tournament that did not materialize.

This was a team almost entirely paced by their seniors. Young, Artis, Jeter, and Jones accounted for over 70% of the team’s offense on the year. Young and Artis go into the books as top-10 career scorers in Pitt history. They will miss the energy and big play ability of Jeter, and Jones served as their best perimeter defender (other than the now dismissed Kithcart). So how does Stallings replace that? The simple answer, he can’t. At least, not right away. His first class is solid, featuring 6 commits headlined by 4-star PG Aaron Thompson who many expect to be the next star for Pitt. Fans can only hope Stallings continues to attract similarly touted players moving forward.

Looking towards next year, it sure appears things will get worse before they get better. The line-up projects to be Aaron Thompson, Crisshawn Clark (assuming he is healthy), Cameron Johnson (who will need to step up big time, a fact he was fully aware of in the locker room following the UVA loss), Ryan Luther, and either Rozelle Nix or Corey Manigault. That is not a winning group in the ACC, they simply do not have the talent. However, that is more of an indictment on Dixon’s recruiting struggles at the end of his time at Pitt. Dixon never quite adjusted to the ACC recruiting landscape, and the team that he left behind reflected that. I have been the first to criticize Stallings and do believe this team should have finished better than 16-17, but he was brought in to recruit. He brought in NBA talent like Wade Baldwin and Festus Ezeli to Vanderbilt in recent years, and as a Pitt fan you can only hope he can do the same thing moving forward in Pittsburgh. For the time being, get comfortable with some rough Pitt seasons as the team loses one of its most productive classes.