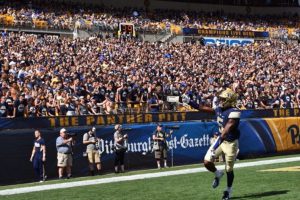 A wave of new students, higher expectations, and adoring longtime fans poured into Heinz Field Saturday for the Pittsburgh Panthers’ first game of the 2018-2019 season.

The Panthers took it to the house the first time they touched the ball as Maurice Ffrench exploded for a 91-yard return off a lackluster 56-yard kickoff from Ethan Stark. Alex Kessman’s extra point put the Panthers up 7 to 0.

The Albany Great Danes looked to have Pitt’s defense on its heels early in their opening drive. After a false start on first down, Jerah Reeves caught a 37-yard back shoulder pass from quarterback Vincent Testaverde. They drove all the way to the Panther 19-yard line with the help of a catch by Dev Holmes and runs by Elijah Ibitokun-Hanks and Testaverde. The drive screeched to a halt when free safety Damar Hamlin picked off Testaverde and took it back to the Great Danes’ 19-yard line.

Pitt stuck to its strong running game to punch it in from there. Redshirt senior Qadree Ollison hammered down two strong runs for a combined 14 yards before Kenny Pickett kept it himself and speared into the end zone for 6. Kessman missed the proceeding extra point attempt.

The Great Danes offense continued to struggle with an ensuing three and out after the score, and their defense looked no better. Pat Narduzzi worked every facet of his offense to go 75 yards for another touchdown. Kenny Pickett chipped away at the Albany defense for fair gains to the likes of Taysir Mack, Tre Tipton, Rafael Araujo-Lopes, and Tyler Sear. In true Pitt fashion, Ffrench zipped in for 6 off of a jet sweep. Pitt’s 2-point conversion failed.

When Albany got the ball back, Testaverde launched another bomb to Dev Holmes for a whopping 40 yards on first down. On second down, he dumped it off to Ibitokun-Hanks who broke it off into a 28-yard run to the Panther 5.  After a few runs for losses and a penalty, Testaverde snuck it in over the middle to his man Holmes on third and goal for the touchdown.

Darrin Hall opened up Pitt’s next drive with two small runs, which were followed by a tough and contested toe-tapping 26-yard grab by Mack.  Pickett maturely picked apart Albany’s defense and kept his perfect completion rate. The three-headed beast that is Pitt’s running core looked alive and well as A.J. Davis and Ollison carried Pitt to the Albany 4-yard line.  Pickett scored his first passing touchdown of the year to Rafael Araujo-Lopes in the back corner of the end zone.

As admitted by Pat Narduzzi, the second half did not look as good as the first half, finishing scoreless on both sides.  Testaverde got his team to the red zone for the third time that game, but was ultimately intercepted by Damarri Mathis in the end zone for a touchback on the opening drive.

After some solid runs by Araujo-Lopes and Hall, Pickett commited his first incompletions of the game and followed it up by fumbling after attempting to leap over a defensive back for a first down. The sophomore escaped unscathed after a scary play for Pitt fans.

Albany showed no signs of hope as they went for another three and out after the turnover. Pitt failed to capitalize, however, Ollison continued to barrel through the Great Dane defense for multiple double digit gains.  Pickett moved through his progressions confidently as his offensive line held strong even into the third quarter. He found Davis on the short pass which turned into a 16-yard play, the biggest of the drive. Shocky Jacques-Louis got his first touch of the game for a 6-yard carry. On the proceeding second and 10, Neven Sussman picked off Pickett for no gain at the Albany 19-yard line.

Neither team was able to get anything going from there, the only notable incident being Pickett slow to get up after a slide. He later re-entered the game and it is speculated the injury was just a cramp.

Barring a mediocre second half offensively, Pitt should feel good about going into next week’s matchup against their rival Penn State. With no large injuries and some question marks answered, Saturday’s primetime game should be exciting on both ends of the ball.