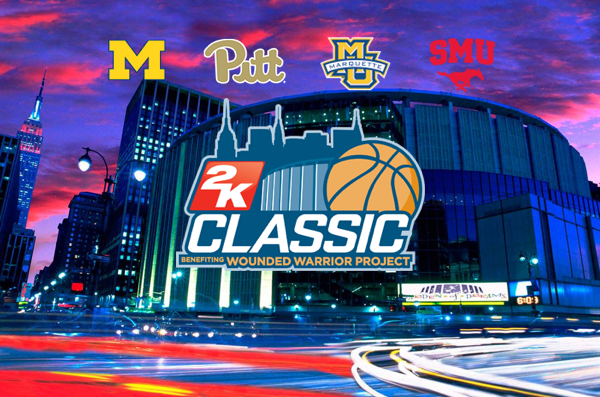 Thursday night will be a night of firsts for Kevin Stallings and the Pittsburgh Panthers.

Thursday night will be the first “road” game (technically a neutral site) of the 2016-17 season.

It will also be the first time this year’s Panthers squad will play a team capable of making a run deep into March.

The game is an important one, as it hopefully will serve as a preview or a first glimpse of what’s to come for this year’s squad.

In all, Pitt is due to face 11 teams that were either ranked or were receiving votes in the inaugural “Preseason AP Top 25” poll.

While the opponent in the semifinals of the 2K Classic is not one of those teams, it certainly is comparable to the teams Pitt will face come January and February, when ACC play begins.

Southern Methodist is not an elite team, nor is this year’s version as talented as last season’s team, that despite being penalized in the preseason by the NCAA for violating regulations was one of the final undefeated teams left in Division One. A team that if given the opportunity, was poised to make a deep March run.

This year’s version of the Mustangs is more like a Ford Focus. They’re not flashy or even all that star-laden, but if given the opportunity to gel properly, this SMU team can make some noise come tournament time.

While Tuohy isn’t projected to make a major impact in 2016-17 (he played in just 30 games in three years at Loyola, scoring just 10 points in his limited action), Ojeleye most likely will.

The all-time leading scorer in Kansas High School Basketball history might be a bit rusty, as he gone nearly two years between NCAA games.

During his senior year of high school, Ojeleye averaged nearly 40 points per game (38.1), and committed to Duke over Indiana. After languishing on the bench behind future NBA players Jabari Parker, Rodney Hood and Justise Winsow, Ojeleye decided to transfer for his final two years of undergraduate eligibility.

In the fall of 2015, Ojeleye announced he would be leaving Duke to pursue an opportunity to receive more playing time. That March, Sean Ojeleye watched as his former Duke teammates won the National Championship.

Eventually, Ojeleye decided on SMU due in large part to then head man Larry Brown. After deciding to sit out all of last season to preserve a year of eligibility, Ojeleye looks primed to make a big impact for SMU in 2016, despite Brown mysteriously stepping down from his job in July.

Consistently picked to finish in the top three teams in the American Conference, SMU is a very solid team that poses an opportunity for Kevin Stallings’ experienced Panthers squad.

The ability to notch an early and ever important quality win on the old resume.

Something that was often needed in the final couple of seasons of Jamie Dixon’s Pitt tenure, when the NCAA Tournament committee viewed previous Pitt teams.

In the end, if the Panthers are able to defeat the up and coming SMU Mustangs, Pitt will move on to the Championship Game of the 2K Sports Classic, where they will face the winner of Michigan and Marquette, both of whom are likely to make the big dance.

Hopefully for Kevin Stallings and the Panthers, Thursday night is another night of firsts; the first of many important quality wins.