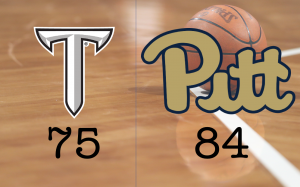 The Pittsburgh Panthers continued their promising start to the 2018-19 season with an 84-75 win over the Troy Trojans on Monday night. The victory was the third straight double-digit win for coach Jeff Capel to open his first season at the school. The Panthers were led by Jared Wilson-Frame and Xavier Johnson, who scored 24 and 15, respectively, on the night. Johnson also chipped in 9 assists and 7 rebounds. Wilson-Frame’s strong outing comes following his 20-point outburst in Pitt’s previous game vs VMI, continuing a strong response to missing the Panthers’ first game of the season via suspension, which has seen Wilson-Frame come off the bench to provide scoring.

Pitt jumped out to a quick 7-2 lead behind 5 points from Trey McGowens before Troy would eventually claw its way back to tie the game at 9-9 and then 14-14. Pitt would seize control of the game over the next 5 minutes with a 16-5 run powered by 4 points each from Johnson and Terrell Brown. Troy chipped away at the deficit to trim it to 40-35 at halftime, but an Au’Diese Toney bucket followed by a Kene Chukwuka three-pointer  in the second half stretched the lead to 10.

The Panthers continued their hot shooting from beyond the arc with a 10 of 27 performance vs Troy.  Wilson-Frame went 6-10 on his own, including several key shots late in the second half when the Trojans were on the brink of taking back control of the game. Troy hung around throughout the second half led by Jordon Varnado and Alex Hicks, who poured in 22 and 16 points, respectively. 5 straight points from Varnado midway through the second half cut the Panther lead to 66-58, and a few minutes later, a B.J Miller jumper made it 71-64 but that would be as close as it would get the rest of the way.