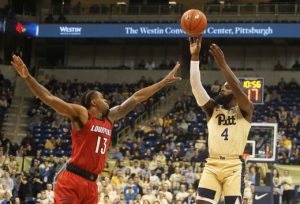 It was 690 days between the Pitt Panthers 80-66 victory over then 17th ranked Florida State and their 89-86 victory over the Louisville Cardinals Wednesday night, their first victory in ACC regular season conference play since that upset over the Seminoles on February 18th, 2017.

Despite having leads as large as 16 in the second half, this milestone victory for new coach Jeff Capel never seemed quite secure. The Cardinals forced the overtime period with a 17-4 run to end regulation, erasing Pitt’s 13 point lead with 5:26 to play.

Trey McGowens set a new single game scoring record for the Panthers with 33 points, 4 better than Clyde Vaughn’s 29 set against James Madison in December of 1980.

Fellow freshman Xavier Johnson overcame three first half fouls to put up a double-double with 21 points and 10 assists.

Both teams stayed closely competitive in the overtime period with no team finding a lead larger than three. Playing without both the services of both Terrell Brown and Kene Chukwuka who had both found out leaving the Panthers without a player over 6’6” in the rotation, Pitt took the lead with 38 seconds remaining on a breakaway layup from McGowens.

Usually a reliable free throw shooting team, the Panthers missed three of four foul shots with a chance to expand their lead beyond worry. Shooting from the charity stripe was a concern for Capel’s squad all evening long, with Pitt putting up a dismal 48.5% on 16/33 attempts.

This was the Panthers first victory over Louisville since 2010.

The Panthers will try to avoid another two year drought between ACC Conference wins as they visit the 15th ranked NC State Wolfpack on Saturday.