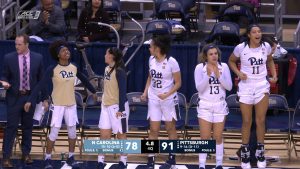 Pittsburgh opened the game on a ten to three run thanks to three  three-pointers, two of which were by Cassidy Walsh. The Panthers had a 28 to 21 lead at the end of the first quarter thanks to Cassidy Walsh going four for five from behind the arc.  Pittsburgh led 40 to 32 with 4:27 left in the first half thanks to seven points by Kauai Bradley.

Pittsburgh led 53 to 37 at the half, shooting 66% from the floor and 75% from beyond the arc. North Carolina continued to struggle on the court as Paris Kea missed every three-pointer she took. Thanks to North Carolina’s struggles Pittsburgh maintained the lead 62 to 51.