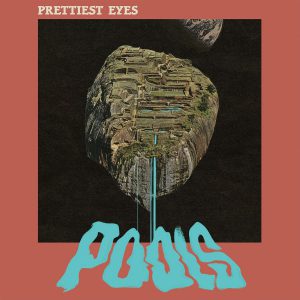 Garage-punk three-piece Prettiest Eyes is back with a powerful sophomore album out now on Castle Face Records. Pools is a garage infused synth-punk record full of distorted organ wails and attention-grabbing drum lines. The album is powered by its driving rhythm section, with almost tribal drums and animated bass riffs setting the stage for unhinged distorted, wailing synthesizers and at times screechy, lo-fi vocals. Prettiest Eyes are able to really capture the raw sound and menacing, taunting attitude of punk in their compositions. Throughout the album the trio effectively delivers both menacing, subdued songs and aggressive noise punk bangers.

Throughout the album Prettiest Eyes showcase their ability to write compelling punk music. On the title track, the song shifts from a simple bass and drum line with a droning synthesizer into a hardcore chorus of smashing cymbals and piercing synth chords. “Dandy” features the band performing an upbeat keyboard rock song that sounds almost like it could be a Doors cover, but they still deliver with more distortion and anger. “Gold Snake” is another excellent track, featuring energetic pulsing drums and drone-y synths as the vocals build the tension on top of this backdrop, until the end when the vocals layer on top of the screamed chorus. Throughout the album the drums are very versatile, at times sounding very tribal and gothic, such as on “Prance” and “Uncut.” At other times they’re battering and hardcore, like on “Untitled.” Unfortunately, the slower, more melodic songs lack the originality and energy that makes this album so great, but they are not really “bad” songs, they just don’t stand out as much as the rest of the album. The lo-fi vocal production also makes the singing less memorable, and when listening to the album all the way through the vocals feel repetitive.

Prettiest Eyes are making unique synth punk music in 2017. By making an album that hearkens back to traditional hardcore punk music but while staying original through the use of the distorted organ and the influence of lo-fi garage rock, Prettiest Eyes made a strong, record. Overall, Pools is an excellent punk record, drawing a wide array of sounds and influences. I am excited to see how they progress in the near future.

You can follow Calder on twitter @97c8 and catch him on Tuesdays from 6 – 8 PM not-DJ-ing for Pittsburgh’s premier punk rock program: Electric Bananarama. This review was edited by John Wright of the WPTS Editorial Board.