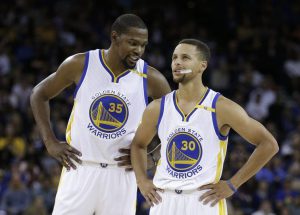 With the NBA season at its halfway point, WPTS contributor Willie Keeler gives his thoughts on what could happen once the 2017 offseason rolls around.

Steph Curry is now possibly the biggest international icon in the NBA, and you can’t think Steph without thinking of the Warriors. It would be a blockbuster move for him to leave the Warriors. The biggest option would be Charlotte where his father will urge him to go, but the Warriors have made it clear they’ll do anything to keep him, and why would Curry ever want to leave what is possibly the best lineup in the history of the NBA.

Especially if they win the title this year, it’s the same deal for Durant as it is for curry. Why leave the Bay Area with what they have going right now? I expect Durant to sign a max deal with the Warriors, whether it’s this year, or after his player option next year.

If the Clippers lose their stars this offseason, they’ll spend big bucks to bring someone to LA. Gallinari would pair well with DeAndre Jordan, and try to keep the Clippers relevant.

Pau Gasol has fit well in Popovich’s system, and the Spurs still hope they can pass the Warriors one day. For a man who’s been on the move when it comes to free agency, I don’t see Gasol leaving this offseason

With the Clippers looking like they’ll never beat the warriors in the playoffs, and free agency coming up for Griffin, Paul, and Reddick, I see the Clippers dominant starting 5 breaking up and going their separate ways starting this summer. One of the members of that dominant starting 5 is Blake Griffin. Griffin has had his injury and off the court issues in LA, so I don’t see the Clippers going crazy to keep him. What I do see is a return home to his birthplace where he would stay paired with an all star point guard, with Westbrook in OKC. Offensive minded Griffin would pair well with defensive minded Steven Adams at the 2 forward spots, and he could continue getting his signature alley-oops from the likes of Westbrook and Oladipo.

Hayward will be a target at the small forward position this free agency. Teams will most likely go stronger at Hayward than Durant, expecting KD to stay longer in the Bay Area. One of those teams targeting Hayward will be the Celtics, with Hayward’s former coach at Butler, Brad Stevens at the helm. The Celtics main focus right now though is trading for a small forward, and Utah fans have fallen in love with the former Butler man. The Jazz will do all they can to keep Hayward as their franchise player, and keep him away from Boston.

If the Pelicans want to go all out this free agency to pair a top tier guard with the new combo of Boogie and AD, Holiday is going to want out. A place that seems perfect for Holiday is his former team the 76ers. With the 76ers looking like they’re on an upward trend with many forwards to chose from, including potential 2018 All-Star Embiid, the Sixers could look to win now, and go for Holiday.

After the Magic traded Ibaka, players came out and said he was a problem in the locker room. We’ll see how he is as a teammate in Toronto but the Raptors made the move because they believe he fits their system, and if he does why will Ibaka voluntarily leave somewhere he fits in?

If the Warriors re-sign Durant and Curry, they’ll have to push out everyone that’s not on a league minimum contract, including Iggy. Iguodala could join Embiid, Simmons, and possibly Holiday as stated before, and go back to Philly, as they have started to look like they could even be in the playoffs this year. A team with Holiday, Iguodala, and Embiid could make noise in the east.

Lowry has become part of a dynamic duo with DeMar DeRozan up in Toronto, and with DeRozan re-signing last year, I see Lowry doing the same to keep this Raptors team in the Eastern Conference conversation

If Hayward stays, Millsap can join the Jazz and add another serious contender to the Western Conference. Jazz fans would certainly welcome Millsap back to SLC, where he spent 7 seasons, and pairing with Gobert would cause a headache for every team’s big men.

What was said for Blake Griffin holds true. I see the Clippers breaking up and for CP3, a perfect spot to create a new big 3 has all of a sudden arisen, in a familiar spot. The Pelicans could have a big 3 of CP3, Boogie, and AD if they go all out selling the former home of CP3 to him.

Derrick Rose hasn’t looked like MVP Derrick Rose but that doesn’t mean the Knicks don’t still want him, and frankly, there aren’t many teams that will put up money for the extremely injury prone Rose. I Expect the Knicks to give Rose another one-year deal as they won’t want to go for a long term deal with Rose’s injury history.

The Pacers have been disappointing so far this year, and with all this Paul George trade talk it wont help them keep their new acquisition Teague. The Pistons want to get rid of Reggie Jackson so why not pair Teague with Drummond. If the Pistons are able to make a deal for Jackson they’ll have a void at point guard and Teague will be the most realistic option for them to sign at that position.

Dwayne Wade will most likely retire in the next few years, so I expect him to re-sign with his hometown team and play out his career there