For the first time since the Washington Mystics overcame the Connecticut Sun in five games to win the WNBA Finals on October 10, 2019, the WNBA will take the floor as the league tips off play at IMG Academy in Bradenton, Florida. The league, led by Commissioner Cathy Engelbert announced the July 24 start date last month while outlining how play would look considering the impact of covid-19. The regular season, normally 36 games,will be shortened to 22 matchups. Playoffs will follow the traditional format of single elimination games in the first and second rounds, followed by semi-finals and finals in a best of five game series.

This will be a unique season for reasons beyond medical precautions as well, as players and team staff and officials continue to use their platform this season to fight in support of reforms for women affected by police brutality and racial injustice.

WNBPA President Nneka Ogwumike believes that the 2020 WNBA season “will serve as a strong platform for female athletes to continue supporting and bringing voice to the social injustices in our country.”

As tip-off approaches, the first groups of players have begun to trickle in at IMG Academy, joining their respective teams in preparation for their season to begin. As many big names are taking their talents to Florida including Skylar Diggins-Smith, Sabrina Ionescu and Sue Bird. Let’s look at how these 12 teams are shaping up for the 2020 WNBA season. 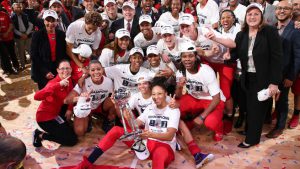 As the reigning WNBA Champions, this team will look to pick up where they left off last season. However, without key players from last year including Kristi Tolver, Natasha Cloud, LaToya Sanders and potentially reigning MVP Elena Delle Donne — no word on whether she will play this season—this team could look drastically different. Yet with a deep core looking to make a name for themselves for Washington, this team has the potential to thrive under the face of a new squad.

The 2019 WNBA runner-up will look to redeem themselves in Florida this summer, although that may be tough without stand-out post, Jonquel Jones, who has announced she will be sitting out this season. However, Alyssa Thomas and Jasmine Thomas are back for the Suns along with rookie Kaila Charles, making Connecticut a team to watch as play begins the end of this month.

The Chicago Sky has a lot of questions surrounding their season in the bubble. Diamond DeShields, the young star out of Tennessee, has high hopes for this year after leading the Sky in scoring last season. Coming off an injury, Azurá Stevens will look to contribute to the Sky’s success at the guard position. Despite the uncertainty within this team, they will be grounded through their veteran back court, Courtney Vandersloot and Allie Quigley.

Indiana will be under new leadership inside the bubble with Marianne Stanley being named new head coach in the off season. Former Baylor standout, Lauren Cox is a great addition at the forward spot for this team. Cox, along with two other youngsters, Kathleen Doyle and Victoria Vivians will be led by veteran Candice Dupree as they compete at IMG Academy.

This team will be without stars, Renee Montgomery and Tiffany Hayes. Both players decided to sit out this season, requiring the Dream to rely on other talent to guide the team. They also traded Brittney Skyes, leaving them without their top three scorers from last season. Atlanta will look quite different this year although Elizabeth Williams, a recent trade from Las Vegas hopes to lead this young team in their efforts to improve off last year’s league-worst record of 8-26.

As a team with seven rookies taking the floor, there is quite a bit of uncertainty surrounding the New York Liberty. One bright spot for this team is number one draft pick, Sabrina Ionescu who made history at Oregon being the only player in NCAA D-1 history to reach the milestone of 2000 points, 1000 rebounds, and 1000 assists. Ionescu will be supported by third-year star Kia Nurse and eight-year veteran Layshia Clarendon. Asia Durr, a standout guard who averaged 9.7 points per game in her first season, announced on Tuesday she will sit out this season due to testing positive for COVID-19. First year head coach, Walt Hopkins has a young but talented squad looking to make some waves in their 22 games this season. 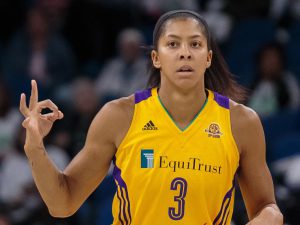 With Chiney Ogwumike and Kristi Tolver not expected to play in Florida, the Sparks will look to their league veterans to boost them. Nneka Ogwumike, Candace Parker, and Chelsea Grey all average 10+ PPG and hope to guide the Sparks to their 2nd WNBA Title in the past five years. Supporting youngsters, Brittney Skyes and Kristine Anigwe are expected to shine in the bubble, making this team a real threat for the championship.

Despite outside shooter, Kelsey Plum being out for the season, the Aces have high expectations with newcomer Angel McCoughtry, along with the stellar post duo of A’ja Wilson and Liz Cambage. This team will continue to push the pace of their play with Kayla McBride leading the way for the guards. Ace’s former number one draft pick, Jackie Young is expected to continue building off her first season in the league.

Without head coach Dan Hughes, who will sit out as a high-risk individual for covid, players will have to adjust to leadership under assistant coach, Gary Kloppenburg. With big name stars including Sue Bird and Breanna Stewart, both a part of the 2018 championship team, expected to play, the Storm has a decent shot at the title.

The Lynx have historically been one of the most successful teams in the league, having won four national championships. They plan to use this opportunity to highlight some new faces in the bubble. Eyes will be on Napheesa Collier, reigning Rookie of The Year as she hopes to lead this organization. Collier will be supported by two rookies drafted in April, forward Mikiah Herbert Harrigan and point guard Crystal Dangerfield as well as veteran Sylvia Fowles who is the only remaining player from the 2017 championship roster. Maya Moore, one of the league’s all-time greats will sit out this season to continue fighting racial injustice.

With league veteran Diana Taurasi at the helm of this franchise, this team has tremendous leadership on their side. Additionally, the Mercury is now home to former all-star Skylar Diggins-Smith who will return to the court for the first time since 2018 after giving birth. With that power duo at the guard position, Brittany Griner will be called upon to hold things down in the low post for the Mercury.

Dallas is going to look like a completely different team this year, with a whole lot of potential. The Wings grabbed three first round picks in this year’s draft including Satou Sabally, Bella Alarie and Tyasha Harris who have the talent to make this team an exciting one to watch. Katie Lou Samuelson, a standout from UConn, will be a much-needed asset for this team beyond the arc, as she enters her first year with the Dallas Wings franchise. This season will also see the return of second year player, Arike Ogunbowale who led this team in scoring last year. The Wings have a lot of fresh faces and young talent with souring potential for the future.

The WNBA will begin their unusual season on July 24th in Bradenton Florida with times and schedules to be announced.