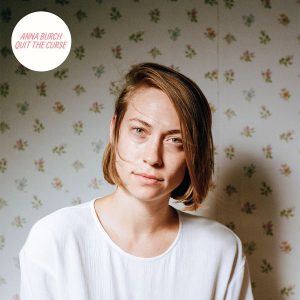 Quit The Curse is everything I want in an album! It’s got that light, fun, feel matched with some sad lyrics, and mixed with a little bit of longing. Anna Burch is the cool older sister I always wish I had had. C86 tapes are still cool in my opinion and Anna Burch is exactly that. It has all the twee elements I love mixed in with all the sadness too. I would also compare her to Best Coast or Chastity Belt or maybe even Amy O, surf-y, but melancholy. Her songs are well thought out and full of longing.

2 Cool 2 Care, the opening track, is a song about pretending to ignore someone. Tea-Soaked Letter is sarcastic witty song about miscommunication. Asking 4 a friend is a song about dating a drug deal. Quit the Curse is a song about being trapped in a toxic relationship, which is really the main theme of the album. Belle Isle I would say has a different feel than the rest of the album, it’s a lot more folk then the rest of the album. Her voice also sounds less chipper on that track and more blunt. It’s also I would say the most full of longing compared to the rest. In Your Dreams is harder than the rest of the album, because it’s just her picking on her ex. My favorite track is definitely What I want, because it has a really nice riff it’s soft, yet strong. I’m pretty sure it’s about her feeling alone after an abusive relationship, the chorus is “I won’t play the victim because I can’t get what I want”. The 2nd to last track Yeah You Know is about being sure of where you’re at and also has that nice beachy riff. The closing track With You everyday is a fun track that’s actually pretty sad. Overall I think this album is super fun and well written. Definitely something you’ll wanna crank up and dance too. I’m also aware I’m super biased, because this is also just so in my music taste. Check out Quit the Curse if you like beach indie rock!

You can follow Elyssa on Twitter @elyssapollio and cry with her on Mondays from 2 to 4 PM as she hosts Anxiety Hours on WPTS Radio! This review was edited by Sandy Fairclough of the WPTS Editorial Board.
Share