This review was brought to you by… 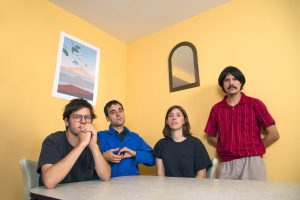 Palm is a band that I have been into for a while, after seeing them open for Girlpool and Shred. “Pearly”, the opener for the album, is a strong experimental rock track with dreamy vocals. “Composite” is a stand out on the album due to it’s slightly less experimental and sounds more like a 70s rock song for the first minute or two. “Dog Milk” was one of the first singles from Rock Island and has a sick steel drum effect and beat. “Forced Hand” has a cool loop that gets increasingly chaotic and strange, switching between the soft dreamy vocals and a weird loop. “Theme” from Rock Island is an instrumental track that’s quite groovy and cool. “Bread” initially feels thick with synth like most typical vaporwave tunes, but then transitions into being quite a unique track. “Bread” is probably one of my favorite tracks on the album, because of the way it builds. “Color Code” has an awesome bubbly effect and the vocals are so good. “Swimmer” slows down the album while keeping the same vocal and horn effects. “Heavy Lifting” is a softer track that sounds less tropical and more dreamy while having one of the best uses of layering on the album, from vocals to drums. “20664” is another instrumental track which has an alien feel to it, like you’re in space dreaming. “(Didn’t What You Want) Happen” is a strong closing track that leaves the listener with a clear understanding of what Rock Island is all about. This album is a great sophomore release which proves that palm just keeps getting better and better. Check it out if you like guitar loops and dreamy vocals.

Oftentimes complex music carries with it a big-brained connotation. Some albums are billed as “growers,” and acts as “challenging,” or “important.” While some releases undoubtedly deserve such labels, an air of mightier-than-thou-ness tends to loom over groups that go against the grain. Cue Palm, the Philadelphian experimentalists with an immense bank of technical skill, penchant for wild, textural instrumentation, and an ear for truly unique melodies. Arriving off 2017’s stunning EP Shadow Expert, Palm decides to peel off a few layers of abrasiveness with Rock Island while keeping with the time-change-heavy, “can’t stop won’t stop”* rocking feeling of their prior work. Rock Island highlights their pop abilities, creating music with an energetic, glowing core that’s reminiscent of Strawberry Jam-era Animal Collective. Utilizing a kaleidoscopic concoction of (what sounds like) steel drum samples, saxophones, tropical synths, drum machines, clarinets, their trademark manic percussion, competing suave and angular guitar work, and psychedelic vocal performances, Palm have really hit it out of the park. With one of the freshest takes on indie rock (if you could even call it that) in recent memory, “Rock Island” is more a 41-minute tropical getaway than an album: eclectic, exciting, and enigmatically fun. The frantic energy and sticky melodies of this release will hopefully catapult Palm onto the map, and will without a doubt give listeners the danceable, tribal, catchy, and “important” tracks they crave.

Palm is, without a doubt, one of the most exciting bands to come out of the Philadelphia music scene in recent years. This is a bold statement considering the amount of popular bands that have come out of the city– however, with Rock Island, Palm has cemented their place as one of the mainstays of their genre. Admittedly, it took me a long time to start listening to Palm as I spent months cycling through Tera Melos’ discography when Palm began to gather hype. I was floored the first time I listened to their 2017 EP Shadow Expert. What I expected to be a group of delay pedal junkies messing around with effects for a half an hour turned out to be a brilliant display of unconventional musicianship. Palm finds a way to take conflicting instrumentals and piece them together to form distinct songs. These same techniques can be found in their 2018 album Rock Island. Palm is made up of two guitarists/vocalists, a bassist, and a drummer. While listening to this album, I was constantly wondering how they could make these sounds using their limited instruments. My favorite song from the album, “Forced Hand”, demonstrates their clashing of different styles. The guitars play a riff that is offbeat from both the vocals and the rhythm section. The first few seconds of the song almost sound as if each person is playing their own song independent of each other. The song then goes into a hook that brings together all of these distinct parts. *“Forced Hand” demonstrates how each individual in Palm is talented on their own, but also possesses the ability to play in a way that showcases their fellow members’ talents- all while forming a cohesive sound. I will definitely be keeping an eye out for this unique and up-and-coming band’s future releases.

This review was edited by Dustin Butoryak of the WPTS Editorial Staff.  Palm is coming to Pittsburgh! They’ll be performing at Club Cafe on February 18th.