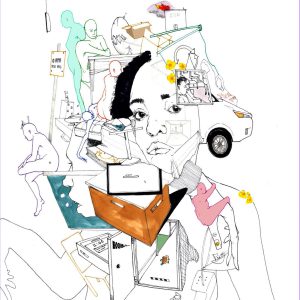 Noname is a Chicago rapper who has been at the forefront of a wave of great MC’s from the city along with Chance the Rapper, Saba, Smino, Mick Jenkins, and many others. Chicago has become one of the most surprising epicenters for rap this decade. I, like many others, was first introduced to Noname by her verse on “Lost” off Chance’s second mixtape, Acid Rap. In that verse, she introduces us to her soft-spoken and meticulous bars that instantly made me excited to hear more. After a 3 year wait from that mixtape, she finally released Telefone, her first project. In the two years since it dropped I have found myself going back to it more than nearly any other rap album from that year and years past. The songs were catchy, smooth, introspective, and smart. So when Room 25 arrived on the September 10, I was hyped.

This album is about Noname growing up. In interviews, she talks about how she has been exploring her sexuality for the first time, and how moving to LA and out of Chicago has changed who she is. She needed this move; she needed this change in her life just like many of us need a change. The beats are lowkey and keep the personal feeling of the album at the forefront. Most are still very interesting jazzy beats made using live instrumentation. The lyrics throughout the album vividly explore her sexuality as well as her move, but it also finds ways to be more than that to the listener. This album is purely Noname, and you can tell that from the opening moments in “Self.”

When you first turn on the album you are met with the shortcut of “Self.” While only clocking in at 1:34 this song has some of the most memorable bars from the whole album. This introduces us to a braggadocious Noname, one who responds to haters who think “a b**** can’t rap.” After that, we get the most overtly political song on the album, “Blaxploitation.” A song that takes shots at not only the current government for keeping her up at night with their horrible politics but also Hillary Clinton for “masquerading the system” by trying to pander to African-Americans. My favorite three-song run of the album is finished with “Prayer Song,” backed by a pulsating jazzy percussion section. I cannot get enough of the drum kit on this song. The snare fills are brilliant and keep this track going forward quickly. On top of that is Noname’s intricate and quick flow that matches the beat perfectly.

At this point in the album, we start to see Noname’s top-down approach to creating Room 25. The features are perfect throughout and perfectly picked by her. On the previously mentioned “Prayer Song” Adam Ness delivers a catchy a chorus that is up there with some of the best choruses on Telefone. Phoelix shows up on two tracks, “Window” and “Part of Me,” using his smooth voice to deliver choruses that are sticky and match the vibe of Room 25 perfectly. Also on “Part of Me,” Benjamin Earl Turner is Kendrick-esque with his flow and tone. Ravyn Lenae shows up on “Montego Bae” delivering a verse on par with many of Noname’s own. I can’t mention features without mentioning what is probably my favorite song on the album, “Ace.” Smino and Saba show up along with Noname and this song is a victory lap for the young Chicagoan rappers. It opens with Smino crooning over a light yet bouncy beat and delivering a fun verse and then the catchiest chorus on the album. Then Noname opens her verse with ”Smino Grigi, Noname, and Saba the best rappers” which after this feels undeniably true and follows with one of her best verses where she throws shade at clout chasers. Then Saba comes in and totally murders the beat with a quick and fun flow and intricate rhyme schemes. Even with all these great features, they never once overshadow who this album is about, Noname.

Did this album live up to Telefone? I would answer that question with a resounding yes. While it does not have as many catchy moments, I believe it works better as a complete art piece than Telefone did, and I expect this to be in heavy rotation throughout my music library just like that mixtape. I can’t wait to see where Noname goes next and if she takes another two years to release something new, that will be completely fine by me. I am totally satisfied with this album.