“Room Inside the World” by Ought – Review 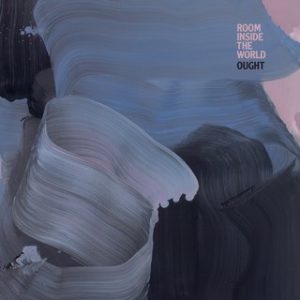 Ought’s debut LP arrived in 2013. It was a sparse statement of frenetic potential and raw anxiousness, showing a group that had, after only an EP, perfected their unique brand of pulsing, slightly off-center, the Fall-inspired post-punk. With no sign of slowing down, the band’s sophomore effort, Sun Coming Down, further pushed the rawness of their debut, with more drawn-out songs, with wide walls of sound and hypnotic drumming taking the place of the stark blankness that formed the backdrop of More Than Any Other Day. The group seemed even less content with society than their already angst-ridden roots, perhaps even apathetic of the results at this point. When they announced their third full-length, I was thrilled for the return of a band as relevant and powerful as Ought to kick off the year, with a fierce political statement ripe with aggression.

I could not have been more wrong with Room Inside the World, however in the best way possible. Coming fresh off his 2017 solo release, frontman Tim Darcy ditches the familiarly adamant and nasally shouts, for deep, dramatically-performed vocals à la Robert Smith. Aside from this, the group’s instrumental habits have also transformed quite a bit. Taking the place of the spiraling, gritty guitar- and bass-work of earlier releases, lie patient, spacy soundscapes rooted in droning viola and delicate marimba. Ought even shows off their new wave influence on the bass and drum machine-based “These 3 Things.” Without spoiling the whole album, Room is a complete musical 180, filled with more synthetic instrumentation and moments of vulnerability and beauty than the group’s other releases combined.

However, unlike many stylistic shifts in pop music history, Ought pulls it off in spades. Most of the songs depart from the frantic pathos they are known for, but the softer cuts are structurally and texturally interesting, while also avoid blandness and cheesiness altogether. The drums on this record are phenomenal in both their recording and performance: each song’s percussive elements vary significantly, adding something unpredictable and inconspicuous track after track. Songs like “Desire” show the groups ability to incorporate indie rock, alt-country, and gospel elements into the palette of their sound without hesitation. The outro to “Desire” also manages to transition from feeling like a noir soundtrack to a Bruce Springsteen jam within a minute’s time, for one of the most stunning and comforting moments on the LP. Similar structural curveballs pop up on “Disgraced in America” and “Pieces Wastes,” both providing an interesting take on the smooth feel of the album in different ways, each experimenting with orchestral breaks and avant-garde time-changes respectively. The vocals on the album take a bit of getting used to, but the consistent quality and varied songwriting make this concise Ought release compelling on its own, and as well as a risky but superbly-executed progression for the band.