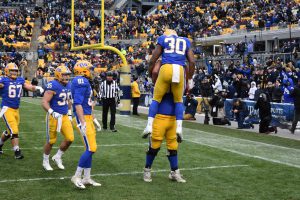 A frigid afternoon on the North Side saw the Pittsburgh Panthers taking on the Virginia Tech Hokies in a pivotal ACC Coastal matchup.

After a short opening drive by the Hokies, Kenny Pickett and the offense marched methodically down the field. Key third down throws extended the drive into field goal range. A muffed snap forced Pitt to settle for a 48-yard field goal from Alex Kessman.

VT’s second drive didn’t fare much better than their first as a critical sack by Rashad Weaver stalled things at midfield. The Hokies were forced to punt on the edge of Pitt territory. 27 and 53-yard rushes by Qadree Ollison and Darrin Hall took the Panthers into the red zone for the first time. On just their fourth play of the drive, Pitt found the end zone with an 8-yard dive. The game stood 10-0 at the end of the first quarter.

Another midfield stop by the defense set the Panthers up with the ball on their own 22. A deep strike from Pickett to Maurice Ffrench went the distance, and the Panthers extended their lead to 17-0. Things went from bad to worse for the Hokies. A decent push down the field came up short when kicker Brian Johnson hooked a 40-yarder left. A huge 58-yard run by Darrin Hall had the Panthers knocking on the door again, but the drive ended in disaster as Pickett fumbled into the end zone. Four plays and 80 yards later, Ryan Willis found Eric Kumah for VT’s first score of the game.

Pitt wasted no time responding. Back to back 20+ yard carries by Ollison set up a 12-yard jet sweep by Maurice Ffrench. With a few minutes left in the second quarter, the Hokies stalled with just enough time to give the Panthers one last drive at the end of the half. A perfect 43-yard pass from Pickett found Taysir Mack within 6 inches of the goal line. Senior fullback George Aston capped the drive, barreling forward to extend the lead to 31-7.

The second half began with a quick three and out by the Panthers. Kirk Christodoulou’s first punt of the day gave the ball back to the Hokies on their own 20-yard line. 17 plays and 80 yards later, Eric Kumah secured his fifth reception of the game in the end zone. The 5-yard catch and subsequent two-point conversion narrowed the margin to 31-15. It didn’t take long for the Panthers to answer. On cue, Darrin Hall dashed Hokie hopes with a 73-yard score. Kessman’s extra point brought the score to 38-15.

In the fourth quarter, the teams traded touchdowns early. Hokie QB Ryan Willis passed to Damon Hazelton for a 24-yard score. Three and half minutes later, Ollison found a seam for 31 yards and his second touchdown of the day. A turnover on downs on the Pitt 4-yard line killed any last chance for Virginia Tech. Not to be outdone by Hall, Ollison broke the largest run of the day on the subsequent play, going 96 yards for another Panther score.

With the clock expiring, the Panthers clinched bowl eligibility and put themselves just one victory away from a ticket to the ACC Championship game, finishing a 52-22 win. They take on Wake Forest in Winston-Salem next Saturday, November 17th at noon.