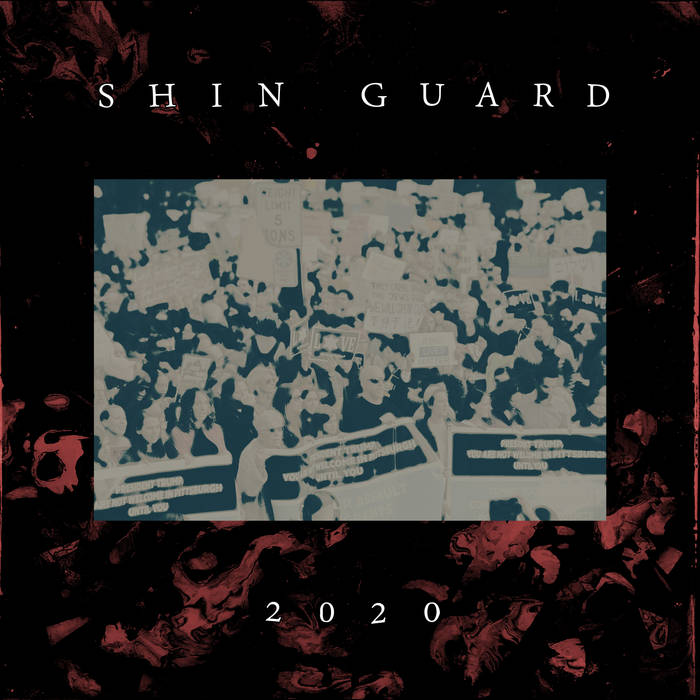 Shin Guard is a four piece post-hardcore band hailing from Pittsburgh. On February 13th they released their second full-length album 2020. Recorded, mixed, and produced by the band themselves, the album marks a point in the band’s discography where it feels like they’ve reached the top of their game. Spanning eight songs, the album touches on politically relevant themes and features infectious riffs that will dance around in your head long after you finished the album.

Kicking off with feedback and then leading into vocalist/guitarist Owen Traynor’s screaming on opening track “Motorcade” gives the listener a taste of what’s to expect. The song builds with awesome guitars filling up the background, seamlessly leads up to the vocals until finally transitioning back into feedback. Every time I turn this track on it just gets me pumped for whatever comes next.

And while the band certainly displays their screamo chops all throughout the album, it’s not all that they have to offer. The album has sax peppered throughout a couple of tracks, which I’m always happy to hear, and even has a spoken word piece. The lyrics cover a wide array of topics including Rosemary Kennedy, the treatment of gender in the country, and the state of abusers in the music scene. This kind of social consciousness is only amplified by the passion that the band puts into the performances on these songs that lets you know that this band really do care about the state we live in.

Two of my favorite tracks on the album are “2007” with it’s insanely enthralling guitar parts, and “Sure” which just kicks off with these awesome drums back with some beautiful melodic guitar parts that leave me breathless every time. Although my favorite on the album might be the closer, “You Will Be Held Accountable For Your Actions,” which starts softer than most of album but abruptly changes part way through into a heavy and intense second half that ends with a kind of decrescendo in sound that’s just a perfect ending for this album. Other highlights are “Spears” and “Epiphany” although you really can’t go wrong with any track on this release.
On my first listen I wasn’t sure how much of a fan I would be as someone who never really listens to the kind of Screamo/Post-Hardcore sound that Shin Guard has, but I think that with “2020” Shin Guard has managed to craft an album that will appeal even to those who aren’t fans of the genre. It’s been on my constant rotation since its release and I think it’s safe to say that you can expect it to be one of my top albums of the year.