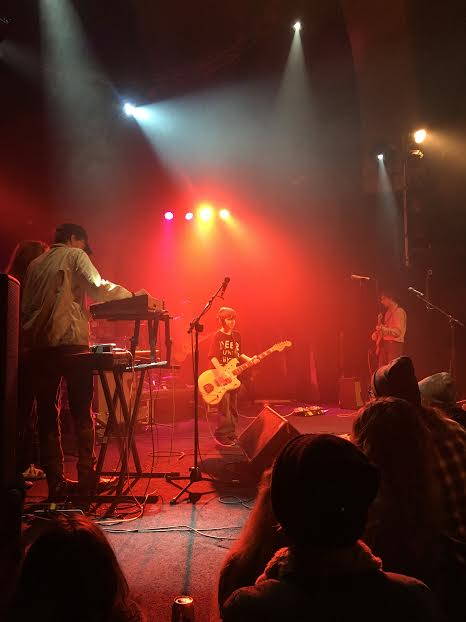 On Wednesday night, we headed to Mr. Smalls before doors opened. We heard Deerhunter sound checking before the show, and if the show was going to be anything like that rehearsal, the audience was going to be in for something interesting. Frontman, Bradford Cox appeared aggressive towards his bandmates, shouting at them to repeat the same few riffs over and over again. The doors opened late because of the prolonged sound check, but once they did, the crowd didn’t seem to mind. The opener, Palm began playing as people were still showing up, filling the room with their eclectic and experimental sound. The audience was made up of a wide range of ages and you could feel the excitement in the room as Deerhunter took the stage.

Despite what we had expected – Deerhunter must have left their pre-show drama in the green room as they took the stage and immediately rolled into two heavy renditions of 2008’s Microcastle, “Cover Me (Slowly)” and “Agoraphobia” and continued to bring a nostalgia filled, focused set full of their hits with very little fluff. Seeing as this show was technically a one-off from their peculiar tour with southern-rock vets, Kings of Leon, it was not too predictable that they would not be promoting any new material and rather ride the momentum of their excellent 2015 release, “Fading Frontier”. Set highlights included an epic singalong version of “Helicopter”, the awesome Late Show with Stephen Colbert rendition of “Living My Life”, and a Elizabeth Warren dedicated version of “Snakeskin” to close out the set. The band returned to the stage to play a two song encore concluded with a visceral 20 minute version of another Microcastle cut, “Nothing Ever Happened.” Bradford Cox stirred things up by bringing the youngest member of the audience on stage to strum his guitar while the rest of the band created a cacophony around him. The audience proceeded to empty out the venue as the jam overstayed its welcome by about 5 minutes; however, fans did not leave unsatisfied as the remainder of their set confirmed their growing legacy as one of the major powerhouses in modern indie rock.