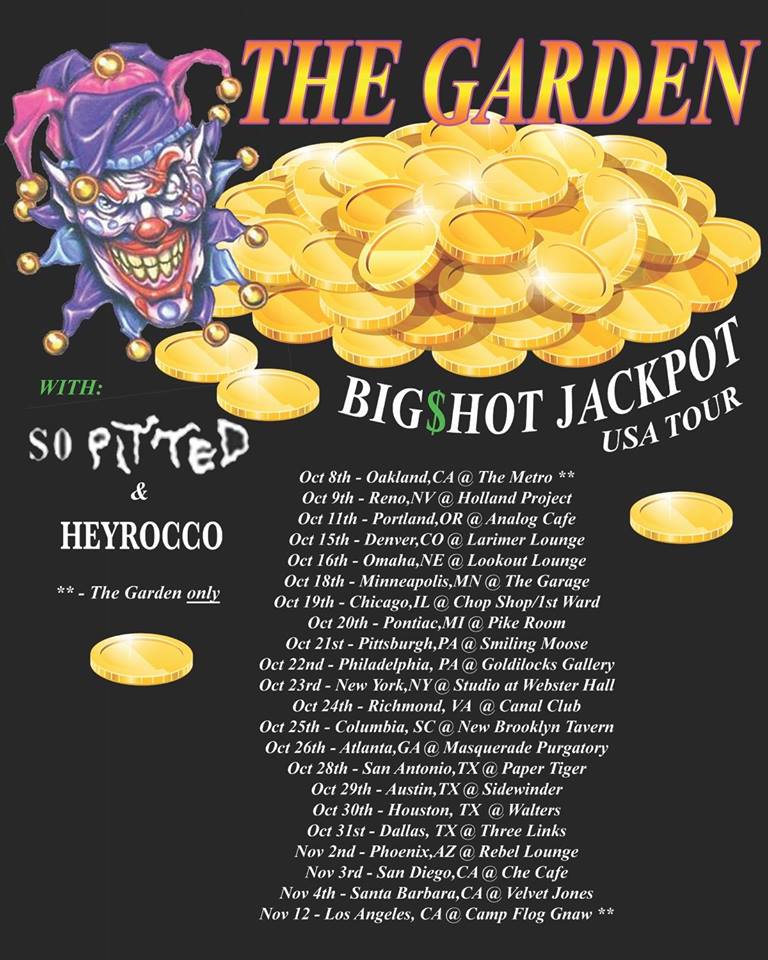 The Garden came to the Smiling Moose on a Friday night with a diverse lineup and a crowd that couldn’t wait to see the California art punks take the stage. What followed was a delightfully bizarre night.

The show was kicked off by local band Spacefish. The self-proclaimed “American Gothic” band is still fresh off of the release of their new album Earth Jokes and they provided a solid start to the night with their blend of strong guitars, pounding drums, and airy synthesizers. One song even featured a distorted ukulele in place of guitar, which definitely was an unexpected twist and a highlight of the set.

South Carolina rockers Heyrocco followed with a set that was loud and bold. They certainly brought a lot of energy and passion to the stage, but their set felt awkward and disjointed as they alternated between uptempo pop-inspired tunes and much heavier material. Although their recorded output is strong, it didn’t seem to translate well live on this night. Still, I’d recommend checking out their Bandcamp and giving them a chance (the link can be found at the bottom of this article).

Next came the night’s biggest surprise. So Pitted, the Seattle noise rock outfit, came decked in sunglasses, neon colors, and leather trench coats and won over the crowd with their fantastic showmanship and brutal sound. “Woe”, a track off of their Sub Pop-released debut “neo”, was a clear crowd favorite as guitarist/vocalist/drummer Liam Downey’s unsettling persona paired with the song’s shouted chorus of “I feel like I am dead” to create a moment that was beautifully chaotic. Later in the set, Downey played the role of Moses as he walked into the crowd with what looked like a neon clipboard in each hand and parted the sea all the way to the bar at the back of the venue, only to return to the stage as if nothing had happened. So Pitted was noisy, strange, and a ton of fun for everybody lucky enough to be there.

The Garden picked right up where So Pitted left off and pushed the levels of weird and fun even higher. The crowd moshed (which I found surprising at first) and enjoyed every second as Wyatt and Fletcher Shears moved rapidly through their set. The Garden’s eclectic drum-and-bass sound created a palpable energy, one that didn’t subside even when both brothers emerged from behind their instruments to jump around and sing along to the backing tracks of some of their more eccentric material. Songs like “Call This # Now” and “The Apple” had the first several rows of the crowd shouting every last word. By the time their set was over, it was clear we had all experienced something that only the Garden deliver. The Garden let us into their extraordinary world, and it was a night that I won’t soon forget.

Check out the bands here:
Spacefish
Heyrocco
So Pitted
The Garden