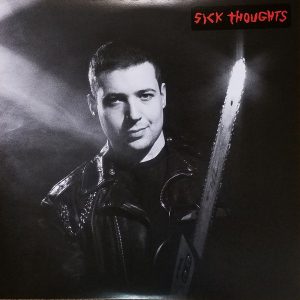 I lack the words to adequately describe how nice it is to have a punk record, a no frills, no hyphenates, no genre-bending, no horns or synths or xylophones capital P-U-N-K record cross my desk in 2018. We’ve reached an odd point in modern music where there’s more punk influenced music than ever. You’ve got your twee-punk, your pop-punk, folk-punk, synth-punk, surf-punk and a veritable Baskin Robbins 32 Flavors smorgasbord of other subgenres, movements, and memes that are in some way “punk” adjacent.

I can’t help but feel there’s a danger of missing the forest through the trees there. Having all this new choice in how I’d like my punk rock is nice but where do I turn when I’d just like plain vanilla punk music? Thanks to New Orleans’ own Drew Owen, AKA Sick Thoughts, I now have an answer, I can turn to his new self-titled album to have my face melted in under a half-hour.

Sick Thoughts runs a concise twenty-three minutes, and can we just appreciate that runtime? Twelve tracks taking on average less than two minutes and moving as quick as we can follow. That’s perfect. It’s exactly as long as it needs to be, long enough to earn its status as a proper album but not so long that it runs out of ideas or starts blurring into samey, concrete grey, guitar music slurry. From the mature-looking cover art featuring Drew Owen holding a chainsaw you can tell Sick Thoughts is a project looking to move out of basements and bars and into the big leagues of punk rock (slightly bigger bars and basements where GG Allin once vomited,) and Owen is choosing to do so by doubling down on what he does well in a package I can experience cover to cover in the time it takes me to shower, dress, and hop on my bike.

No song on the album runs longer than three minutes and thirty seconds, but most lie around the two-minute mark and a significant portion are even beneath that. These varying runtimes allows Owen to try on a handful of masks and influences in the “Sick Thoughts” sound to great effect; dipping into Buzzcocks-sounding neurotic teenage territory on “Headache” and cribbing the Misfits’ (Glenn Danzig Misfits, natch) horror movie aesthetics for the minute-and-change “Blood and Guts.” Imitation and influence are hot topics in rock criticism lately, but these imitation tracks are in the minority compared to Sick Thoughts’ own meaty, chunky, fuzzy brand of punk. Chief among these is the album’s first single and signature track; “Chainsaw.”

This album is best enjoyed while shouting expletives and attempting to dress yourself and pack your bag ten minutes before your morning lecture starts.