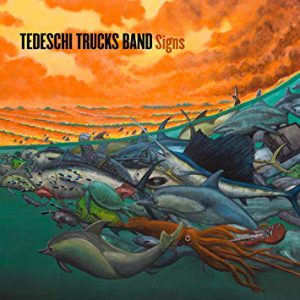 Tedeschi Trucks Band’s recent album Signs released on February 15th, 2019. I was excited to hear their new album, I remember seeing the band perform on NPR’s Tiny Desk Concert and instantly fell in love. I admire Susan Tedeschi’s voice; it’s very soulful and emotional, and it is complemented by the band’s style which is a mixture of rock and blues. Overall the album was pretty good, it wasn’t my favorite album to listen to, but it still had some gems. My favorite songs were “They Don’t Shine” and ‘Signs, High Times”. I love “They Don’t Shine” for its powerful chorus and strong guitar riff. I think the lyrics for this song is unique in the sense that it is very vivid. One line in particular is when she Tedeschi says “you got my eyes burning like honey in the sun”. This line stood out to me, because it gave me an image of frustration and sadness within the narrator. “Signs, High Times” is a funky rock tune accompanied with soulful voices and harmony. The song is about trying to get out of a frustrating and unhealthy situation. Tedeschi’s voice is complimented by a funky guitar sound that brings the whole song together. I respect the other songs on the album, but they were pretty mellow and did not stand out to me as much. However, the lyrics in each song are vivid and express a lot of emotion, and it is definitely worth the listen.