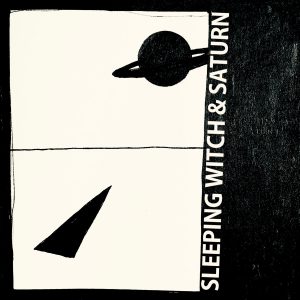 Sleeping Witch & Saturn have done it: they’ve put some recorded music out into the world. They’re one of my favorite local bands and this new EP exhibits what there is to love in their music. The new EP only has three songs, and while many more would have been welcome, they are three very good songs. The first song, aptly titled “New Arrival,” begins with a cacophonous, ominous minute of noise, developing a tense atmosphere that left me uncertain of what to expect from this EP. This is when the hi-hats and bass come in and this tension gives way to a charmingly gloomy atmosphere. Driving bass and chorus heavy guitars lay the backdrop for subdued verses, leading into a catchy and climatic melodramatic chorus. The vocals during the chorus have a slight reverb to them that make them haunting, and they seem to reflect an emotional weight. The intro to the second song, “BCX,” is a haunting New Order-esque guitar riff. The vocals are really pretty and the two guitars effectively highlight each other, one doing a chorus 80s sound while the other fills in the background with a cool distorted sound. The song ends with a weird haunting chorus and creepy claps that are stuck in your head when the snappy snare hits, starting “Ursula.”

“Ursula,” the last song on the album is also very good, with cool reverbed guitar stabs that almost echo each other. This is paired with another chorus heavy guitar riff and very exciting drums. “Ursula” is a really pretty song, but part of me wishes it had vocals because of how good the vocals sounded on the other two songs. But altogether, Sleeping Witch & Saturn is a really fun Gothic Post-Punk project that wears it’s 80’s influences on its sleeve but sounds pretty fresh nonetheless. There isn’t a bad song on this project, my only wish is that there was more, but I’ll wait patiently for more new material from Sleeping Witch & Saturn and jam to these three songs in the meantime.