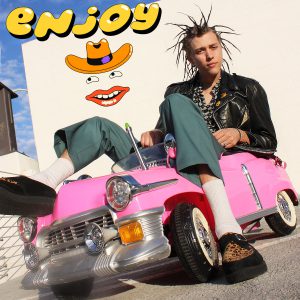 It’s interesting to consider what great artists would excel when dropped into other eras; would Hans Zimmer be considered a great composer had he lived in the baroque period? Would the punks of today be at home in the late-70s first wave? Could the great rappers who elevated their genre to the tops of pop charts in the 90s survive on Soundcloud? Ultimately all the speculation is idle but I find people often ignore how large a role influence can play on an artist’s development in any genre or media, and how the world they grow up in shapes their later output. Art isn’t strictly personal; it’s an interpretation of lived reality.

This is all a very roundabout and needlessly pretentious way of saying I now know what Beck would most likely be doing had he grown up a lazy millennial instead of a gen-x slacker. He’d be on Bandcamp releasing tapes that sound kind of like Enjoy’s new album Small Car Big Wheels on Bandcamp every few months.

Enjoy is the brainchild of Wyatt Shears, one half of punky Orange, California drum-and-bass duo The Garden with his twin brother Fletcher. Small Car Big Wheels is Wyatt’s fifth release under the Enjoy handle and his fourth on Burger records. Wyatt’s California hardcore influences show through as this record is at its best when its charging forward with blistering energy, maximum punk energy and bass-guitar grooviness, but sometimes stalls when it attempts to move in more of a hip hop direction. I will put this as gently as possible: Wyatt Shears cannot rap. Not that this stops him from recording a few decent hip-hop tinged tracks. Like Beck before him, Shears’ obvious talents as a performer and producer save his ventures into rapping from ever descending into cringe-territory, but the difference is Beck seemed to realize his rapping was a gimmick bordering on a joke, while Shears seems to be legitimately giving it a go.

Despite this, Small Car Big Wheels is not lacking for bops, or for personality, and is clearly the singular vision of an artist unafraid to test his limits and blur genre lines. This album is best enjoyed while eating food you bought from a truck in a new part of town.