Something Old, Something New, Vol. 1

We’re starting a new tradition for the new year here at WPTS! It’s a biweekly feature where we talk about one classic album from the 20th century, and one great but underrated album from the 21st. We hope you guys can find some cool new music this way, or just bond with each other about a particular and particularly awesome album. And for our inaugural volume of “Something Old, Something New”, we’ve picked a couple of doozies, so let’s get right into it!

British 70’s-rock icon Nick Lowe was very important for launching the careers of likeminded early-new-wavers and pub-rockers like Elvis Costello, Graham Parker, and the Pretenders. His production and songwriting chops were so sought-after in his heyday, chances are you’ve heard at least one song touched by his presence, even if you don’t recognize him by name. People were tentative to approach his solo material at first, probably due to its general lack of focus and its controversial statements about the music industry, but today his body of work borders on cult-classic status. There’s no better time than now to start getting into his stuff. And a great entry point for Nick Lowe’s incredibly diverse discography is his cheekily titled debut Jesus of Cool. Columbia wasn’t a huge fan of that title for the US re-release, so you’re probably more likely to come across that album’s close cousin (with a slightly altered tracklist), the equally brilliant Pure Pop for Now People. Check out the album’s lead single here:

As a producer, Nick Lowe was known as “The Basher” for his credo of “let’s bash it out now and fix it in post-production”. As a songwriter, though, he was “The Human Jukebox”, well-known for his ability to write and record in any style from punk (the live version of “Heart of the City” on Jesus of Cool is absolutely blistering) to disco (mixed-meter disco in the case of “Breaking Glass”), and even ska (as on the surprisingly haunting “No Reason”). But in addition to these delightful genre experiments, Jesus and Pure Pop are also well known for their clever and satirical lyrics. One look at the cover art, which features Lowe aping some of the more popular rock aesthetics of the time will tell you, he can be a total wise-ass. “Music for Money” levels a criticism at the very industry that made him and accompanies it with some sarcastic product placement: “Music for money/Gibsons for gain/Bennies for roadies/Fenders for fame”. Meanwhile, “36 Inches High” reopens the class-war wounds of the 60’s New York folk scene, and “They Called It Rock” aims for the Billboard Top 40 not with a catchy hook, but a shotgun blast of sarcasm. But even through all his insincerity and proto-hipster irony, he was still capable of crafting some of the most genius pop and rock songs of 70’s. Just take one listen to the delightfully jangly opener “So It Goes” and you’ll be hooked. Give him a chance, and you might end up making his cult following even bigger. 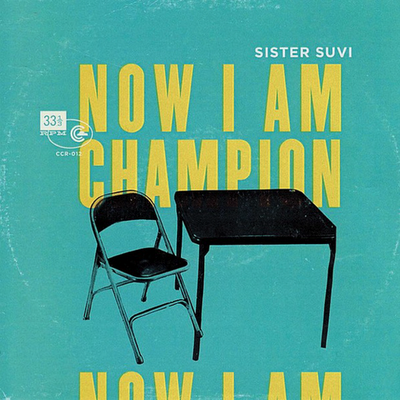 Most notably, Sister Suvi is the band that tUnE-yArDs’ Merrill Garbus was in before she went solo, but the other two members of this Canadian power-trio are just as vital to the music’s sense of wild creativity. Garbus’ co-frontperson Pat Jordache has also received quite some acclaim for his freak-pop solo material on post-rock powerhouse Constellation Records. Meanwhile, their fantastically agile drummer Nico Dann has some serious jazz credentials as well as a brief stint with fellow Québécois Islands under his belt. They only released one album before dissolving, 2009’s Now I Am Champion, and it will forever be one of my top-ten albums of all time. Here’s one of the album’s key tracks:

What does it sound like? That’s kind of difficult to say. It’s much more traditional rock fare than anything you may have heard from tUnE-yArDs, but there are still definitely some similarities. The confrontationally personal lyrics and strong emphasis on groove, as well as Garbus’ vocal acrobatics and distinctively frayed electric ukulele sound can be heard throughout the record, but it’s refreshing to hear those elements placed in a satisfyingly traditional rock-band setting. There are some poppy, playful numbers, like the hand-clappy, school-yardy “Desolation”, or the polyrhythmic quasi-title track “Champion”, whereas other moments on the album like “The Lot” or “Golden” are almost Zeppelinesque in execution. There’s a lot of variation stylistically, but the songs are unified by Sister Suvi’s particular brand of strangeness. Who else would dare to write a pop song in the locrian mode, or have a hook where the first three syllables take twenty seconds, and the last five take three? It’s a magnificently strange collection of mini-epics (the average track length is just a hair over five minutes), but be warned, there are some discomforting lyrical moments here. If you’re not squeamish when it comes to things like erectile dysfunction or extreme violence, they can really add to the raw power of some of the more menacing tracks like “Deadwood” and “American”. The bottom line is, it’s a daring album—one of the most familiar and unfamiliar listening experiences I’ve ever had, and It’s also one of the best-sounding records I’ve ever heard. The production is warm and inviting, anchored by a solid but never intrusive low-end, and yet every song is still crystal clear and rich with detail. It’s a must-listen for any tUnE-yArDs fan, or for anyone who wishes she would anchor her avant-garde tendencies in a more agreeable format.