Something Old, Something New, Vol. 2

Something Old, Something New is a biweekly feature where we talk about one classic album from the 20th century, and one great but underrated album from the 21st. We hope you guys can find some cool new music this way, or just bond with each other about a particular and particularly awesome album.

Something New: The Luyas’ Too Beautiful to Work (2011)

“On the edge of dying, you can see a color unlike any other.” This is the very last line in “Moodslayer”, an appropriately moody highlight from the Luyas’ supremely Canadian sophomore album, 2011’s Too Beautiful to Work. Upon her first unenthusiastic utterance of the line, frontwoman Jessie Stein is apparently struck by its poignancy and spends the remainder of the song’s glockenspiel-kissed coda repeating herself. Unlike any other, unlike any other, unlike any other, unlike any other. This moment is essentially the album’s philosophy condensed down to forty-five seconds. Morbid, surreal, ominous, and tough, but ultimately rooted in sensory experience. Playful, clever, and all the while devastatingly sad.

Which is not to say that Too Beautiful is low-energy or a downer. Its sadness is actually quite luxurious and engaging. Case in point: the band’s eccentric instrumentation, which boosts the album’s orchestral melancholy as much as it mischievously undermines it. Keyboardist Mathieu Charbonneau is a master of the Wurlitzer electric piano, which is apparent immediately; the very first sound on the record is him, nimbly plucking out a difficult mixed-meter pattern on the gorgeous title track. Pietro Amato, on the other hand, is capable of making his French horn mimic both tender arias (“Canary”) and brutal, squealing guitar solos (“Tiny Head”). This is all not to mention their frequent usage of 12-string electric zithers, vintage analog synthesizers, plus strings and horns courtesy of Final Fantasy’s Owen Pallett, Arcade Fire’s Sarah Neufeld, and the increasingly ubiquitous Colin Stetson. But perhaps the most fascinating instrument on the album is Jessie Stein’s voice, because she never feels comfortable in any range. She’s usually muttering in a sour, monotonous alto. And when she goes for the high notes, she succeeds, but you can hear the strain in her voice; every vowel is manipulated to a short ‘e’, which can make her voice sound off-puttingly childish, as on the surrealist rhumba of “Spherical Mattress”. It adds an undeniable pathos that might be an acquired taste for some but just goes to show you: the Luyas are not content with normalcy. They take every opportunity they get to mess with perfectly good songs and make them more interesting, if also more bewildering. The result is a colorful, delicate album that is truly unlike any other.

Something Old: X’s More Fun in the New World 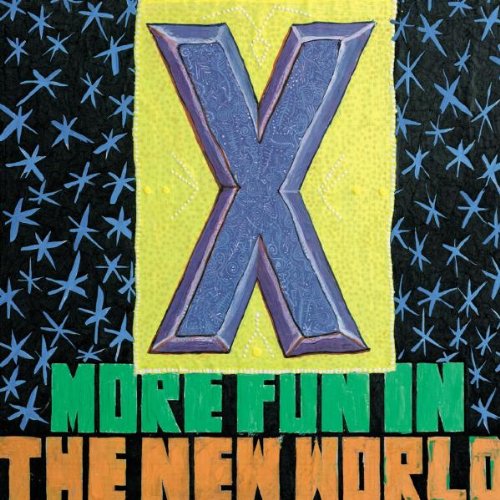 For the uninitiated, X was a seminal American punk band from California who infused elements of classic rock and roll, as well as socially aware lyrics into their white-knuckle blasts of punk fury. Also, they had kickass stage names: John X. Doe, Exene Cervenka, Billy Zoom, and DJ Bonebrake. Actually, his real name was DJ Bonebrake, if you can believe it. Anyways, purists will tell you that the best X album is Los Angeles. And they have a point. They actually probably have quite a few really great points. That album married all the unbridled fury of punk rock with self-aware and gritty lyrics that as the infamously picky critic Robert Christgau once said “made a smart argument for a desperately stupid scene”. It was also their most important record. It resonated with L.A.’s late 70s-early 80s youthful unrest and helped support their likeminded contemporaries like the Germs and Black Flag.

1983’s More Fun in the New World will always be my personal favorite, though. It’s more transparent, and overtly political than anything they had previously released, and stylistically, it covers a lot more ground than samey rockabilly-fixated albums like Under the Big Black Sun. “Poor Girl” has an almost Tom Jones tenderness to it, while “True Love, Pt. #2” sees the band jamming out to some Liquid Liquid-style punk funk. They still find some key moments to rock out, though. “Devil Doll” and “Make the Music Go Bang” in particular can match the fiery rage of all their punk classics. But by far, the single track on this album that sells it for me is “I Must Not Think Bad Thoughts”. Structured as a stream-of-consciousness anxiety attack set against a subversively pleasant major-key chord progression that slowly gets more and more desperate as the song progresses, it’s the most fully developed and emotionally intense song X ever wrote. And it still has incredible resonance even twenty-five years after the Reagan administration came to an end, because of powerful lines like “Both sides are right, but both sides murder. I give up. WHY CANT THEY?” or “There’s blood on my hands. IT’S ALL MY FAULT!” Los Angeles may have been their most timely album, and it’s an excellent one, but More Fun in the New World shows X expanding their range, while filtering everything through the lens of blistering punk rock that made their early work so great.