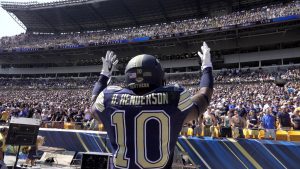 By Morgan Flood and Cale Berger

Pat Narduzzi’s Pitt Panthers saw their first action of 2017 in the Blue-Gold Spring Game at Heinz Field on April 15th.  As Narduzzi enters his third year as head coach, expectations are high for a team that had two wins over Top-5 teams in 2016, while boasting one of the hottest offenses in the country.  The Panthers are also attempting to fill huge voids left by the likes of James Conner, Nate Peterman, and Offensive Coordinator Matt Canada.  All eyes were on a plethora of young running backs, USC transfer QB Max Browne, and a secondary that allowed the second-most passing yards in the nation last season.  The Gold team came out victorious, winning the contest 23-14, behind an impressive offensive effort led by redshirt sophomore quarterback Ben DiNucci and junior wide receiver Quadree Henderson. Henderson was by far the star of the day, rushing twice for 84 yards, making five catches for 53 yards, and scoring a TD. Henderson is still fast, still explosive, and still the weapon all expected him to be for the Panthers.

Browne appeared quite pedestrian in his unofficial debut with the Panthers, accumulating only 48 yards on 6 of 18 passing attempts.  Browne demonstrated impressive arm strength and accuracy, but fell victim to multiple drops and missed reads.  He did pick up his play in the second half, rebounding with 7 completions on 10 attempts for 96 yards.  Browne was able to salvage the performance with a 27 yard touchdown pass to Tre Tipton to end the game, coupled with pass for a two-point conversion to Rafael Araujo-Lopes.  Browne finished with 144 yards and one touchdown on 13 of 28 passing. While his day paled in comparison to his main opponent Ben DiNucci’s (5-5 for 60 yds and a QB rating over 200), that last drive made it clear that the fight for starting QB honors will only continue to heat up over the summer.

Also of note was the defensive effort. Although Browne and DiNucci wore the traditional red pinnies marking them as not to be hit in order to prevent unnecessary injury, likely backup QBs Kenny Pickett and Thomas MacVittie were not so inhibited. This had both upsides and downsides: it gave them, especially Pickett (4 rush attempts for 35 yards), a chance to show their scrambling skills, but it also opened them up to defensive attack, and a total of six sacks were racked up by both sides – four for Gold and two for Blue. The secondary defense, an abysmal unit last season, looked much better in general, though it will of course remain to be seen if this success will be carried into the fall against less friendly opposition.

On the whole, this spring game was an excellent outing for the Panthers, Blue and Gold, and a fine capstone to the fifteen practices of spring training camp. While there is still clearly work to be done before Pitt is ready to open the 2017 season on September 2, this spring game marked definite improvements and highlighted players to watch moving forward over the summer and beyond.